Bypass the Start screen when you log on to Windows 8 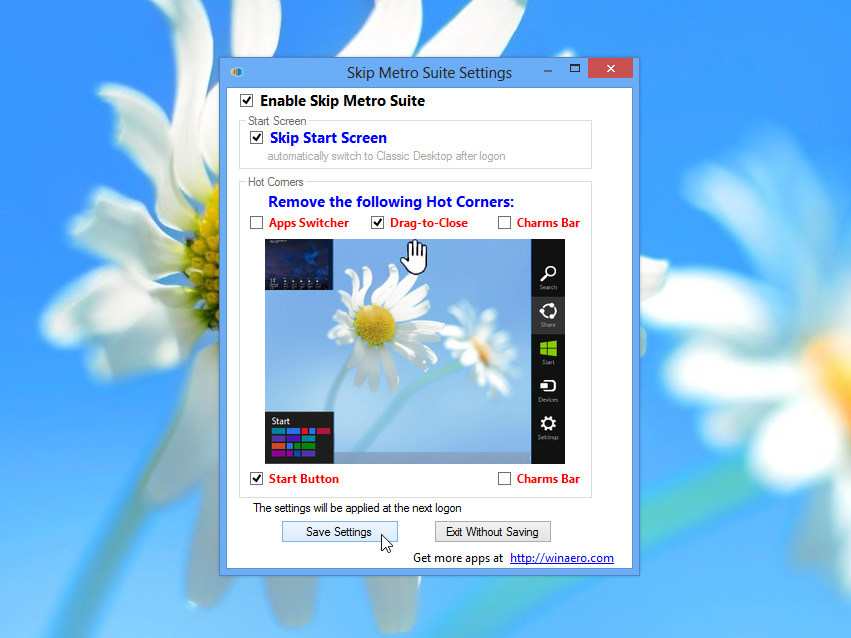 Microsoft really doesn’t want you avoiding the new tile-based Start screen in Windows 8, but it's reckoned without the sheer bloodymindedness of both its user base and developers in finding ways to get around it. For those of us who will still spend a lot of time at the traditional desktop, the need to manually click the Desktop tile (or press [Win] + [D]) to access it after first logging in might seem like an unnecessary waste of time. Which is where Skip Metro Suite politely coughs and introduces itself.

Skip Metro Suite does three things, all of which can be selected or unselected with a single click Its primary focus is to allow you to boot direct to the classic desktop after logging on, but it offers more tweaks, all allowing you to disable the various hotspots on the screen, from task switcher and Start screen to Charms bar and ability to close apps by clicking and swiping down from the top of the screen. The hotspots remain accessible via their respective keyboard shortcuts: [Win] for the Start screen,  [Win] + [Tab] for the task switcher and [Win] + [C] for the Charms bar – and any or all of these tweaks can be switched on or off at will.

It’s a bit of a fudge – Skip Metro Suite doesn’t so much bypass the Start screen as simply launch the desktop from the Start screen automatically. Nevertheless, it’s still more convenient than doing it manually, and the hot spot disabling works perfectly without requiring reboot too. For these reasons it's worthy of your attention.

Version 3.0 is a major new release, with the following changes:

· Installer and Windows service are removed - Skip Metro Suite is now a fully portable app.
· Skip metro engine is rewritten to solve all previous issues.
· Settings are rewritten to resolves all issues with corrupted/non-working settings.
· New checkbox added to disable Skip Metro Suite, the equivalent of uninstalling it.

Does what it says on the tin, although the functionality is also present (along with a replacement Start menu) in Classic Shell too.

SkipMetroSuite Now Pain in the Ass
02 June 2016 03:46, R-D
A while ago i've downloaded skipMetroSuite,
and it worked perfectly.
A few days ago the program started nagging me to download the new version !
There is no way to disable this, and it continous to nag me everytime i log in,
or restart Windows Explorer with a self written script, which also clicks skipMetroSuite.exe in the Windows folder to enable the MetroSuite again,
after it's disabled by restarting the Windows Explorer.
This also brings up the annoying popup to download the new version.
Why would i download a new version while the old one is working perfectly.
Now i decided to remove SkipMetroSuite to get rid of the annoying new version popup.
What first worked like a charm is now a pain in the ass.
So much for SkipMetroSuite.
Related Downloads Other Downloads From This Category

Install a highly configurable Start menu on Windows 7 and 8