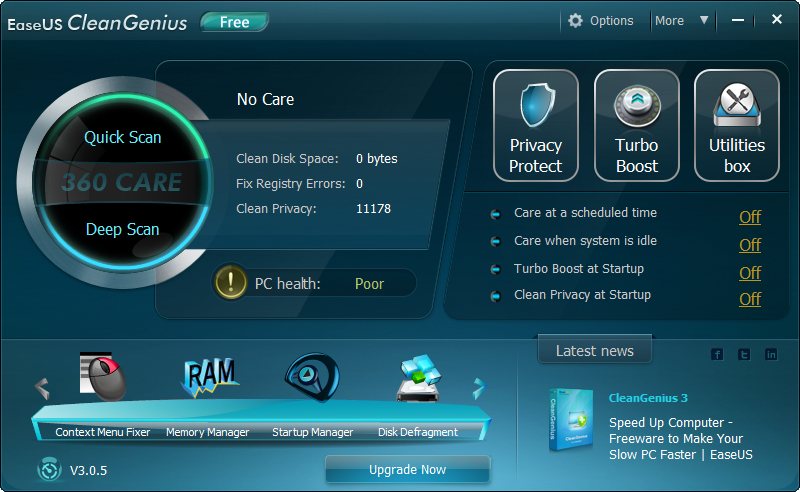 Does the world really need another optimisation tool for PCs? EaseUS thinks so, which is why it’s released this. Despite the name, CleanGenius isn’t a direct port of the more established Mac app, it’s actually a collection of cleanup, speedup and optimisation utilities, all bundled together in one program.

The idea is nothing new, and that’s ultimately where the program falls short. It’s got more options than the likes of CCleaner for example, but some of these are restricted to the Pro version, although the amount of functionality in the free version is still impressive.

You get options for performing various cleaning and privacy scans, plus a one-click “Turbo Boost” tool that does work (largely as it disables a load of Windows Services and hang the consequences – sadly you can’t configure which services get disabled, so will likely find yourself having to switch it off again if things don’t behave as they should).

There’s also a Privacy Protect tool that’s designed to let you clean up sensitive areas of your PC, although why these programs persist in including recent files by default escapes us. Thankfully EaseUS has sensibly included a backup tool, easily accessible by clicking the More button and selecting Recover Manager. Sadly it didn’t actually recover our recent files or jumplists, which just goes to highlight the dangers in using these programs without being careful.

Other tools include a context menu tweaker, startup manager, disk defrag tool, file encryption and driver backup. All of these are free, but those that aren’t include Registry cleaning and defrag tools. Also restricted to the Pro version are scheduling tools for keeping your PC optimised automatically. But seeing as we’ve just highlighted the dangers of letting it loose on your system without due care and attention, maybe that’s not such a bad thing.

It’s competent enough at what it does, but EaseUS CleanGenius doesn’t offer anything new or innovative to stand out from the crowd.