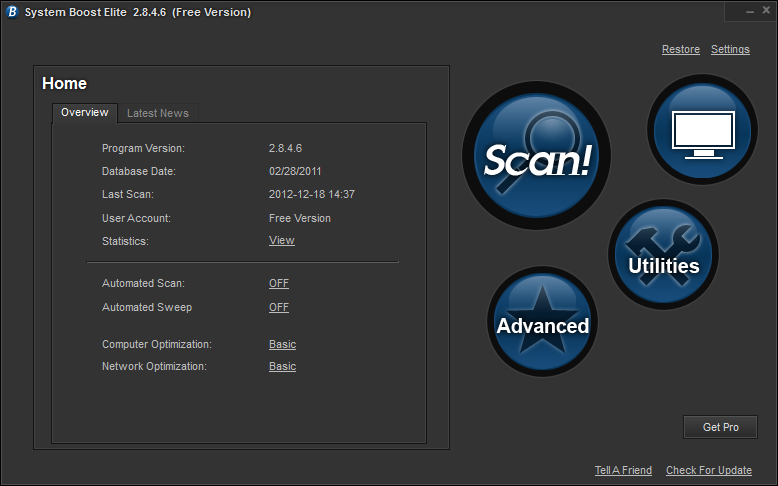 Despite its grand name, System Boost Elite is really just a Registry cleaner, with a hard drive cleanup tool and a few other basic options thrown in for good measure.

In a click the program can scan your Registry for invalid entries; check your system for leftover browsing and application histories; identify junk files, and highlight configuration issues which might be affecting system performance. (The free version can only address problems in three of these four areas, though, which may be a problem for some.)

Sounds good, but our scan didn't produce much of interest. The reports weren't particularly clear or detailed; the program found less junk than CCleaner; and the "System Optimization" module produced a single recommendation, to fix a particular IE setting, which probably wouldn't make any great difference to most people's PC experience.

System Boost Elite does provide a Utilities menu with further tools, but they're nothing too special either. The highlight is probably a duplicate file finder, but it can't compete with the best of the free competition. And otherwise you just get a secure file deletion tool, a Startup Program manager, and a few links to common Windows utilities (Disk Cleanup, chkdsk and so on).

The program is at least fairly configurable. You're able to choose which areas of the Registry should be scanned for problems, for instance, as well as highlighting the type of junk files you'd like to be removed. And a scheduler allows you to run cleanups automatically at the time of your choice.

Otherwise, though, there's nothing too special here, and most people will be better off with more powerful and capable optimization tools.

Short on power and features, System Boost Elite is a fairly basic PC cleanup suite, but it's configurability may make the program useful for some.

Add new capabilities to VirtualBox with this extension pack