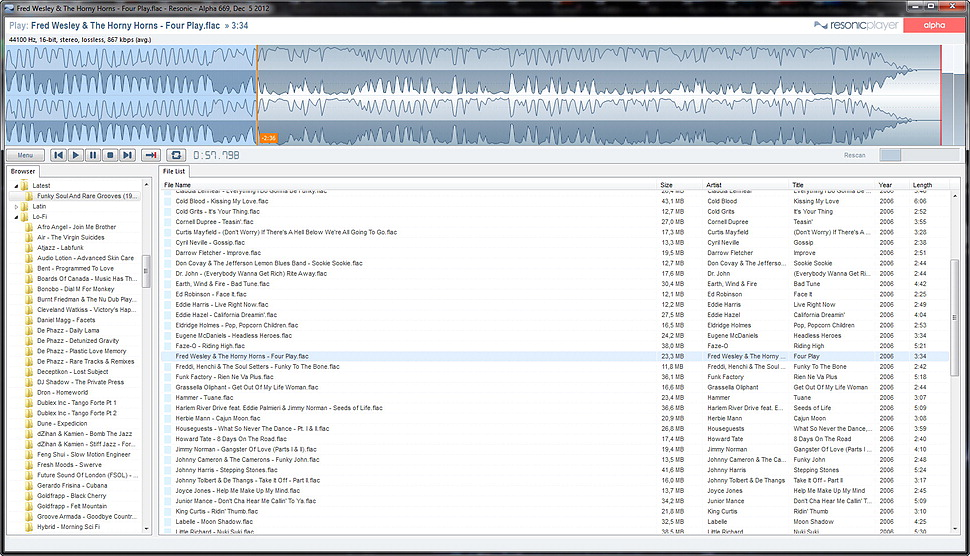 Resonic is a new audio player, easy to use yet with just enough features to be interesting.

Another core Resonic plus point is its Explorer-like interface. Just point the browser at your Music folder, click a track and it'll start playing, before working its way through the other tracks in that folder. (Although as with most audio players, you can set Resonic to shuffle its playing order, or repeat a particular track, if you prefer.)

As soon as the program begins playing any particular track, you'll see its waveform appear above the browser. And this can be useful if you want to jump to a section which stands out (the beginning of a quiet section, say) - just click that part of the waveform to hear it.

If you don't need the waveform, though, it can be replaced with a couple of alternative visualisations (the Linear Analyzer or Logarithmic Analyzer) in a click or two.

Resonic also has a built-in sleep timer which you can set to carry out some action after it's been playing for a defined period of time (log off, sleep, hibernate, power off, whatever it might be).

And not only does the program have keyboard shortcuts for most of these tasks, but it has one or two useful extra ones as well. If you need to talk to someone, say, no need to stop playback - just press and hold the space bar and it'll automatically drop the master volume to a minimum, bringing it back immediately on release.

Resonic has no single killer feature, but there are some useful audio playing touches here, and we'll be interested to see how the program develops