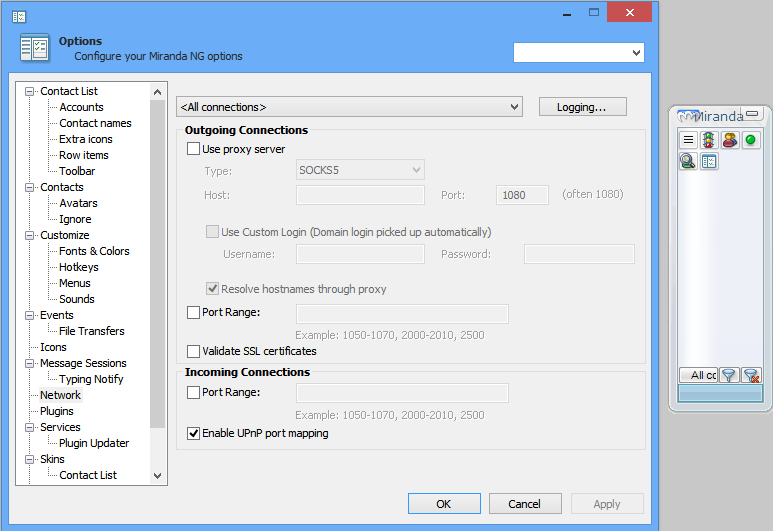 Miranda is likely to be a familiar name to anyone who uses instant messaging software. It is a tool that has been around for a number of years, and gained quite a following thanks to the fact that is made it possible to chat with people on different networks – MSN users could chat with AIM users with a single application.

This is still very much the core or Miranda, but development has started to slow down to a crawl. Because of this, a new branch of the IM client was released, Miranda NG (or New Generation). Development here is on-going and much faster than in the past.

There is no installation involved with Miranda NG, so it can be easily copied to a USB drive so that it can be used on different computers. This is a great option for anyone who frequently finds that they are using different machines or anyone who is a fan of portable software in general.

This is not a pick-up-and-play piece of software; there is a degree of configuration involved. Depending on the IM protocols you want to make use of, you may well find that you need to download add-ons before you can even get started. By default you will find support for AIM, GG, ICQ, IRC, Jabber, MSN and Yahoo, but there are many other protocols that can be added free of charge.

Despite the fact that this is still a sub-1.0 version number, Miranda NG is still remarkably stable and incredibly fast. Portability is a real boon, but it is the apps extendibility that makes it really interesting.

Fast, portable, extendable and well maintained. This is a marvellous IM client well worth checking out.

Create and manage anything from a personal blog and business website, to a huge community-driven website with busy forum

Display alerts and questions from scripts with messagebox