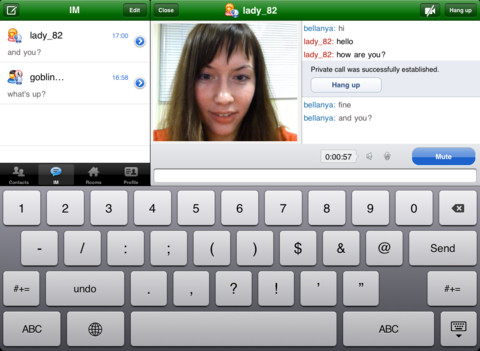 The front facing camera found on the iPad 2 has been put to good use in FaceTime, and it is put to similar use in Camfrog Video Chat for iPad. The app is a combination of a chat room tool and video messaging service that can be used to converse with other Camfrog users all over the world – there is a client available for iPhone, Mac and Windows, so there is a huge potential user-base here.

From the offset the app is a little limited. Despite the talk of video chat rooms, you are limiting to conducting video chats with friends on a one to one basis; it is not possible for more than two people to be involved in a video call. However, it is possible to conduct text based and audio chats with other people in voice chat rooms that have been created. With an extensive user base and an easily searched directory, it’s always possible to find someone new to talk to.

All of this would be great if things went this smoothly. A fairly major problem is the fact that a large proportion of the chat rooms you will encounter require that you are using a web cam connected to a computer – the iPad’s camera will simply not do. There are apparently plans to roll out a server update in the future that will overcome this problem so it is worth keeping an eye on the app to see if anything changes further down the line.

Compared to the desktop versions of the app, Camfrog Video Chat for iPad feels a little limited. It is also a very old fashioned looking app and using it feels very much like taking a step back in time and working with an IRC client from the mid-90s. This is an app that has its place, but there are far better means of communication available which offer more features and fewer frustrations.

A limited chat client that is not really successful in bridging the gap between mobile and desktop users.

A fun group-based chat client for your smartphone

Stream audio, video and photos from your iOS device to your Mac