Easily extract the text from directory trees, list boxes - all kinds of windows and controls 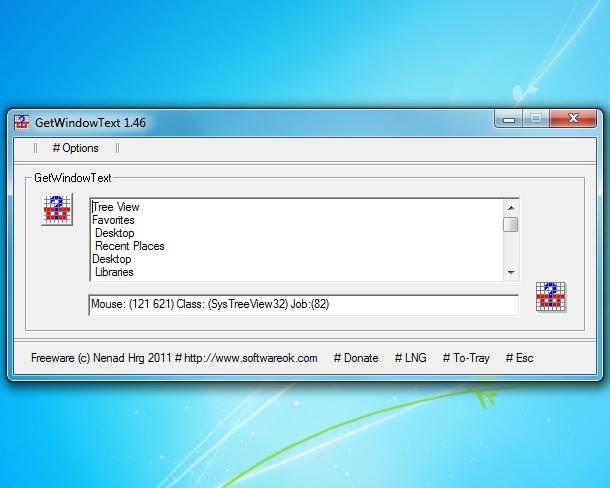 GetWindowText is a tiny portable tool which can extract text from application windows and controls where it's normally very difficult to access.

So what? Imagine that, say, you wanted to record exactly which languages a program supported. This might normally be held in a drop-down list box, so you click an arrow to its right, and the list expands. Windows provides no standard way to extract the contents of that list box, though, so you'll have to manually read them, then retype every language in another document. Which, if there are 30, 40 or more, could take quite some time.

With GetWindowText, though, all you have to do is launch the program, hold down a button, and drag it to the list box. You'll see an outline appear around the list when it's in the right place; you can then release the button; and the list of languages (or whatever else it contains) will appear in a standard text box, which you can then copy to the clipboard and paste wherever you like.

GetWindowText doesn't always work, unfortunately, and its failures seem fairly random. We dragged and dropped the button onto the left-hand pane of an Explorer window, for instance, and saw the correct tree view text. We dropped it onto the right-hand pane, though, and saw nothing at all.

Still, if you ever need to do something like record all the entries in an application list box, then GetWindowText (mostly) makes this very easy. And at a mere 28.5KB, this stand-alone executable isn't exactly going to weigh down your PC, so is easily filed away until you need it.

An easy-to-use tool which can extract the contents of (most) tree views, list boxes and other tricky text

Easily extract the text from directory trees, list boxes - all kinds of windows and controls

Resize a window or tweak its transparency with your mouse wheel

Change any file or folder’s timestamp with NewFileTime

PointerStick is an excellent aid for any presentation