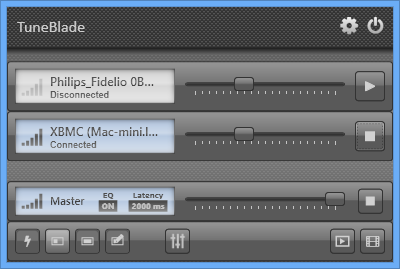 Your PC’s speakers aren’t always the best for listening to your music collection. You can, of course, plug in a pair of new ones, but that costs money and – besides – what if you want to listen to your music in a different room?

These days, you’ll find lots of options for streaming your music collection from one device to another. TuneBlade is another option for Windows users who wish to tap into Apple’s AirPlay streaming function, letting you stream to both hardware like the Apple TV or an AirPlay-enabled speaker as well as software, namely XBMC and ShairPort.

Once installed, the utility sits in your system tray. It’ll detect any equipment capable of receiving AirPlay on your network and give you the opportunity to pipe your audio to any or all of those devices simultaneously – simply tap the play button to mute your speaker and do so.

This barely scratches the surface of what TuneBlade can do: you can watch video through VLC Media Player while synchronising the audio with your AirPlay device, use a three-bar graphics equalizer to tweak the sound quality, and even adjust the streaming mode to reduce latency or improve performance over slow connections.

By default, TuneBlade uses direct playback, which simply mutes your main speaker before outputting to your AirPlay devices. If you don’t like this – or suffer playback quality issues – you can switch to Virtual Device Loopback instead with the help of a third-party app (two are suggested, one of which is free) to improve things further.

It’s all very polished and works well – so long as your device is visible to Apple’s Bonjour service (installed alongside the program if needed, so you won’t need to install iTunes), it should show up automatically here too.

Note the free version will only play for up to 10 minutes at a time to AirPlay hardware devices, at which point playback is interrupted (there are no limits on how many times you subsequently reconnect). No such restrictions apply when streaming to software. Licenses cost $9.99 per user, which allows you to install and run TuneBlade on up to five PCs you own.

Version 1.6.0.0:
[New Feature] TuneBlade now implements a DACP server for AirPlay speakers or hifi receivers to control volume of TuneBlade from their hardware buttons and/or remote. Earlier the volume on TuneBlade and the receivers could be out of sync due to lack of DACP remote support in TuneBlade. Some receivers (like Airstream A100) would not change volume at all from it’s buttons or remote when connected to TuneBlade. These issues are now fixed due to the DACP server in TuneBlade.

[Improvement] TuneBlade now bundles the latest available version of Apple Bonjour service (3.1.0.1) which is required by TuneBlade to discover receivers.

[Bug Fix] On some Windows 10 PCs, device settings like volume and autoconnect were getting reset during system sleep/hibernate/shutdown occasionally. This has been fixed.

[Compatibility Fix] A recent update to ShairPort-Sync caused TuneBlade to identify it incorrectly as a proprietary system and imposed trial limitation on it. Thanks to all who reported this issue and got it resolved with the help of ShairPort-Sync's developer, Mike. (For developers: Any receiver with Zeroconf text record, "am" set to Kodi, XBMC, or if it contains ShairPort or if the record is missing will work uninterrupted with TuneBlade free version.)

[Information] Some LinkPlay chipset based systems like Muzo Cobblestone were failing to connect to TuneBlade. The LinkPlay team have resolved this issue. Please check for firmware update on your receiver if it fails to connect.

Polished, effective, and is a cost-effective alternative to the more expensive AirFoil app for those wishing to stream from PC to AirPlay-enabled devices.

Stream to any AirPlay device on your PC with TuneBlade 1.0

Transform your iPad into a fully featured hifi with BeatBlaster