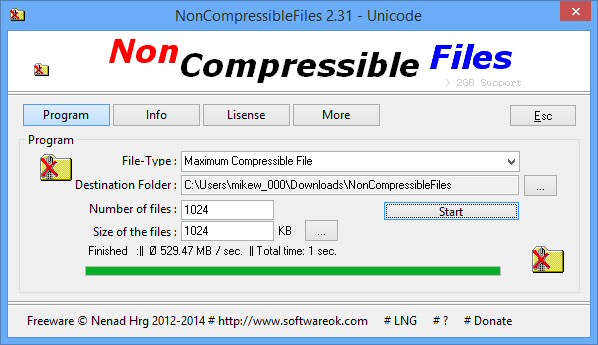 NonCompressibleFiles is a benchmarking aid which creates test files that either can't be compressed (feed them into an archiving program and they won't be reduced in size), or have the maximum possible compression level.

This is particularly useful when you want to measure data transfer speeds. You could just select a random group of files from your own hard drive, but if the data stream is compressed then that won't give you an accurate figure. Transferring 10MB of JPEGs will probably take much longer than transferring 10MB of TXT files, for instance, simply because they can't be compressed to the same degree.

Launch NonCompressibleFiles, though, and you're able to produce as many "non compressible files" as you like. Just enter values in the "Number of files" and "Size of files" boxes, click Start, and wait as they're created.

The end result is a set of files which really can't be compressed. In fact, when we put ours through 7Zip they were 1.29% larger than the originals. And so, if you use them in a data storage or transfer test, you can be very sure that compression isn't going to have any significant effect on the results.

As a bonus, NonCompressibleFiles is able to produce files with the maximum possible compression. It works, too; 7Zip reduced our 1GB of test files to a mere 152KB. There probably aren't as many testing applications for these, but the option is available if you need it.

It's not a program you'll use every day, but if you regularly benchmark hardware or software then NonCompressibleFiles could be occasionally helpful.