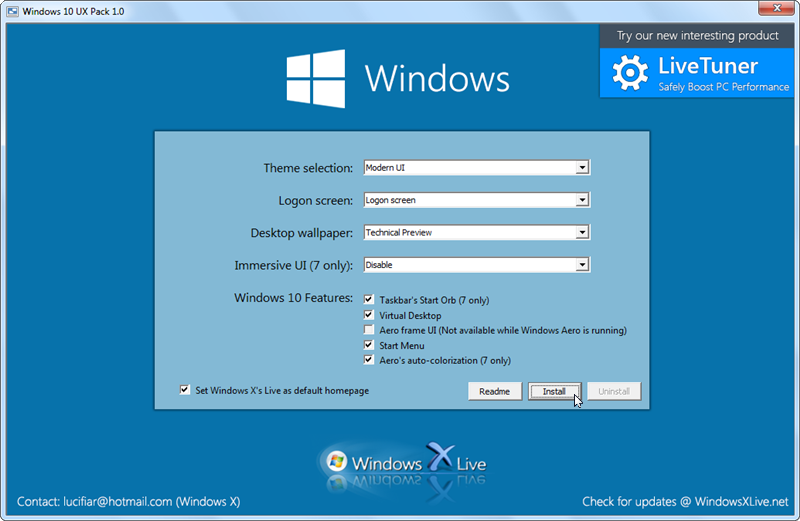 Windows 10 has been announced, which means the moment you upgrade to it on its final release you’ll find yourself having to acclimatise to yet more change. The Windows 10 UX Pack is designed to give you a flavour of the next generation of Windows through applying a selection of different tools and tweaks to provide an approximation of the new OS.

The Windows 10 UX Pack is aimed at later versions of Windows (7 onwards) and is the safer of the two options as it doesn’t do any system file patching to achieve the look and feel of Windows 10. For most people, this is the preferred option as it’s easy and quick to implement, and therefore easy and quick to undo should you decide it’s not for you (just re-run the setup file again).

Start by taking a System Restore point – just in case – then download the zip file. Once downloaded, unzip the setup file and double-click to get started. You’ll see the Pack offers a number of different options, allowing you to experiment with what effects you want and how they’re implemented. Start with the default and move on from there.

The results are superficially similar to Windows 10, but you won’t be getting the full experience. But despite the fact that Microsoft has now made the Technical Preview publicly available for Windows 10, there’s still value to trying these out – so long as you’re backed up before you begin and take that all-important System Restore point, you can try out the Windows 10 look without performing major surgery on your system, particularly if you go with the UX Pack option.

If you’re desperate to get a glimpse into the future of Windows without installing the Technical Preview, this is the way to go.

windows 10 ux pack rar password
16 July 2017 04:13, joshua
Please what's the password to unrar the the file
Related Downloads Other Downloads From This Category

Give your PC the Windows 10 look.