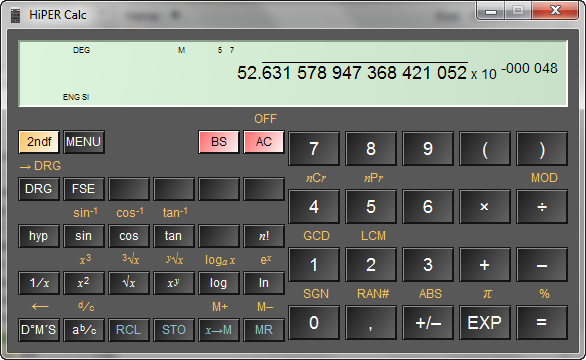 The program is a single sub-1MB .exe file. There's no installation required, just download and run it immediately.

HiPER Calc Scientific looks like a regular calculator. You can use it much like any other, clicking the buttons or entering some calculation on your own keyboard - "2.4*7.9/4.4" - and the results appear immediately.

These basic operations can be extended in various ways. You can set custom precisions of up to 100 decimal places and 9 places of exponent. You're able to use an unlimited number of braces, and there are 10 memories to store intermediate results.

The interface is relatively basic but HiPER Calc Scientific excels where it matters, via its powerful collection of functions

Solve complex equations in seconds with this powerful calculator