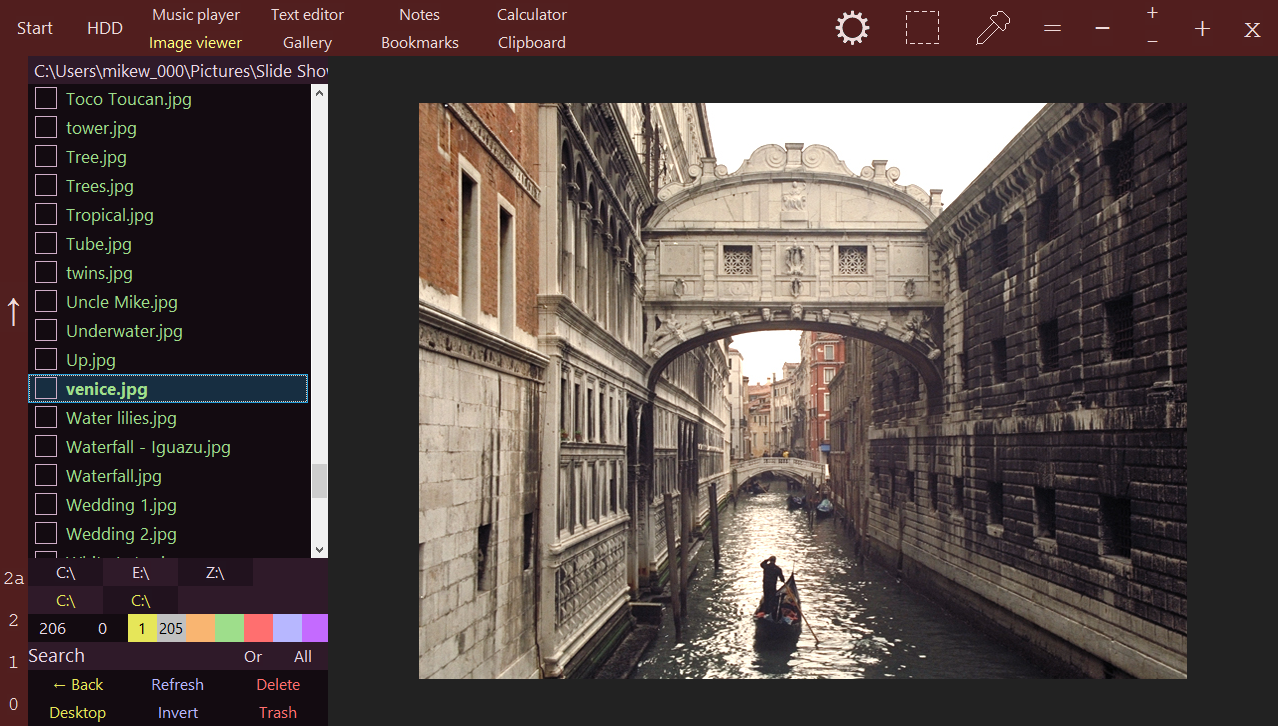 While this sounds promising, the interface is, well, odd. The author has decided to ignore all Windows conventions, so menus, buttons, dialog boxes, right-clicks, just about everything works in its own individual way. Poke around for long enough and you'll figure things out, but the program would be considerably easier to use if it didn't keep throwing these entirely unnecessary obstacles in your way.

Still, once you realise that the Image Viewer displays a menu when you move the mouse cursor to the bottom part of its window, for instance, you'll discover there are plenty of options here. You can save images as different formats (including JPEG XR), apply different effects, rotate, crop them and more. The music player displays your cover art and tags; the calculator includes useful unit conversions; the text editor allows you to highlight text and makes it easy to enter symbols; a Touch Mode reworks the interface to make it more touch-friendly, and so on.

If you want to create a portable toolkit then you're still better off sourcing each application separately. VLC Media Portable and Notepad++, say, will give you far more features and functionality than you'll find in the equivalent apps here.

If you want everything to be available in the same interface, though, Ubiquitous Player does have plenty to offer, and you may find something that appeals. Just be prepared to spend some time in finding that out; there are lots of interface annoyances which you must bypass first.

* It's 64-bit
* A lot of changes to the File manager/Music player
* File manager is approximately 20-25x faster
* File manager has a list of opened folders (tabs).
* General program speed and UI speed improvements
* Easier UI and color scheme customization
* Some useless features were removed
* Image viewer is now a separate application. If you prefer to use your default image viewer instead, just delete or rename the img.exe file
* Bookmarks is also a separate application - Portable Bookmarks 1.0. You can download it below.
* 32-bit version is still available
* other stuff, bug fixes, translations, etc.

Ubiquitous Player tries to do far too many things, and unsurprisingly isn't very good at most of them. It does have some useful features, though, and if you can live with the interface issues then the program may be worth a try.

Explore the innards of binary files- and more