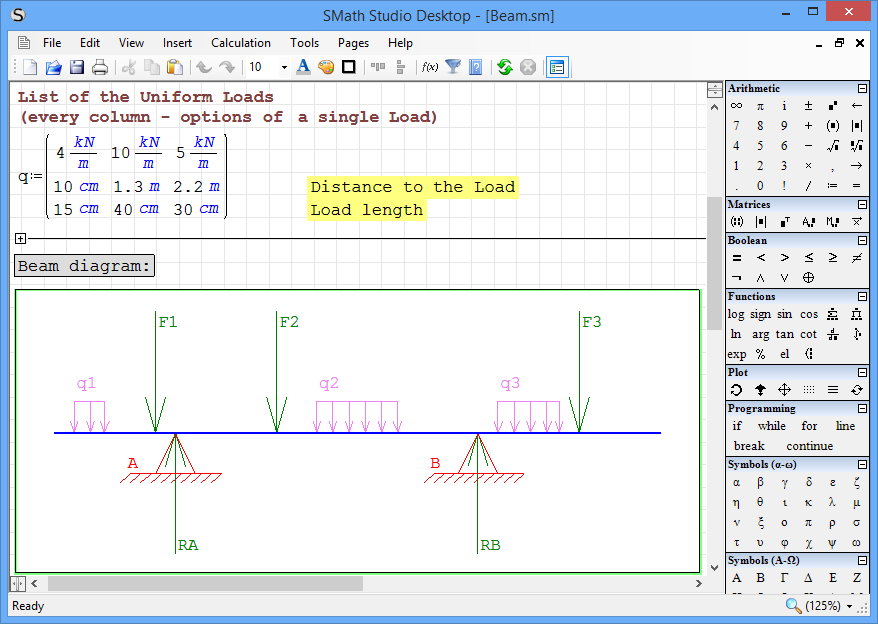 SMath Studio is a comprehensive mathematical notebook program, similar to Mathcad but entirely free for personal or commercial usage.

Although it's aimed very much at engineers and scientists, the program can be immediately useful to anyone. Just click anywhere on the paper-like interface, type a simple math expression - 2+2= - and as soon as you hit the equals key, the answer appears.

You can do that anywhere, but one immediate SMath plus is that it displays what you're typing using the appropriate mathematical notation, rather than just a string of characters.

The program also supports just about every function you could ever need, and plenty you won't. To try that out, type Sin. As soon as you press "S", SMath pops up a list of everything it thinks you might want to type. Sure enough there's sin and sinh, but you also get sec and sech, sqrt, solve(2), solve(4), submatrix, sum(1), sum(4), and a host of measurement units, amongst other things (Angstrom, BTU, byte, dB, deg, dpi, dyne and more).

Assorted plugins help you do much more. Bundled examples extend the program to work with images, plot graphs, maybe save the results as images or HTML.

There's a lot to learn, but SMath Studio provides several examples to get you started. Click Tools > Snippet Manager > Examples and double-click anything interesting to take a look.

An amazing math tool, a must-have for engineers and scientists everywhere. (And it's not bad as a quick expression evaluator, either.)

Enter math in a document - and check it, too

An advanced replacement calculator for iOS