Is software monitoring your PC use? 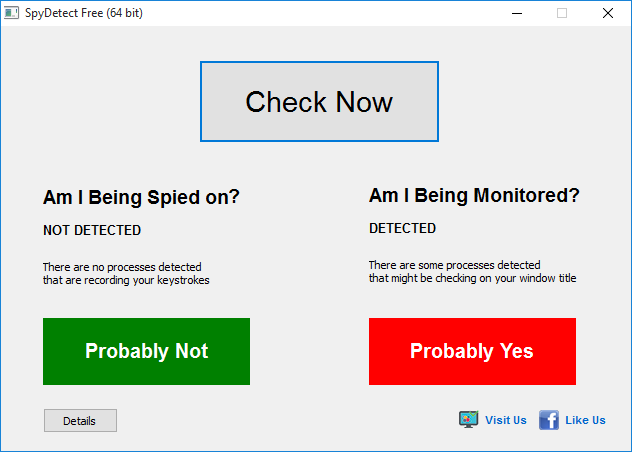 SpyDetectFree is a simple portable tool which might detect monitoring software on your PC.

We say "might" because there's no massive and regularly-updated signature database powering the program. Instead it uses two generic techniques which could pick up some software, but will miss others entirely.

Using the program is as easy as launching it, clicking "Check Now" and waiting for around a minute.

SpyDetectFree first looks for processes which have hooked your keyboard, and so might be monitoring keystrokes. If this is the case you'll see "Probably Yes" displayed under "Am I Being Spied On?"

This verdict doesn't necessarily mean anything suspect is going on, because programs may monitor your keyboard for entirely legitimate reasons, perhaps to detect some global hotkey. To find out more, click the Details button and SpyDetectFree displays details of the offending process for further investigation.

The second test looks for processes which might be checking your application window title, a common trick when recording the software you're using and perhaps some basic details about it (the document you're working on, website you're visiting etc).

Leave the SpyDetectFree window active for around a minute, and the program delivers its "Am I Being Monitored?" verdict.

This is a weak detection method, so we wouldn't pay much attention if you're told "Probably Not".

If you're told "Probably Yes" then it's more likely that something really is spying on you, but not necessarily malware. Window title watching is also a common technique used by consumer and business monitoring tools such as parental controls packages and time trackers.

SpyDetectFree will miss most malware and falsely flag some legitimate processes, and we wouldn't take its verdicts too seriously. But the program is no-strings free, doesn't require installation and might pick up simple monitoring tools, so if you're concerned about possible snooping there's no harm in giving it a try.

Protect everything you type in your browser from keyloggers

Protect your passwords from keyloggers

Are you safe from information-stealing malware?

How to test anti-keylogger software

Ghostpress keeps you safe from (some?) keyloggers