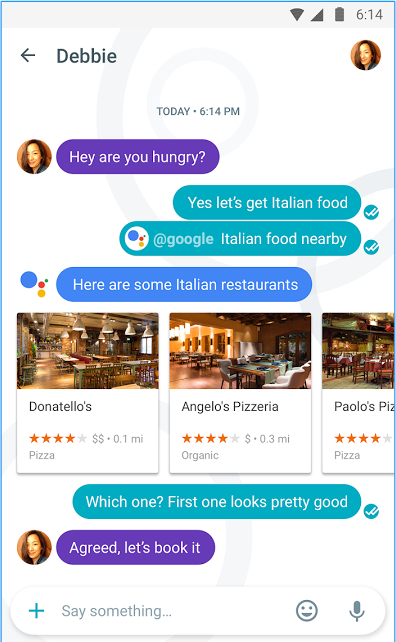 Google Allo is a smart messaging app for Android and iOS.

Core chat features are much like other apps. You can type or dictate messages, use custom stickers ("designed by independent artists and studios from around the world") as messages, add emojis, include photos, and doodle over everything to add pictures or text.

Small but worthwhile tweaks include "SHOUT". No need to use ALL CAPS to emphasise something, just increase or decrease text size with a swipe.

The app gets more interesting with its "Smart Reply" feature, which analyses incoming messages and displays sensible (hopefully) replies.

At its simplest, Smart Reply might offer a quick "yup" to a friend's "Are you on your way?" But there's also some depth here. It someone emails a picture of their dog, Smart Reply not only gives you a general "aww cute!" response, but it can also use some Google power to, say, try and identify the dog's breed.

Allo also includes a preview of Google Assistant. You're able to chat one-to-one with the Assistant or include it in group chats, then ask it for movie times, local restaurants, plan travel, play games, ask questions and even get regular updates on the information you need.

Privacy features include Incognito, an end-to-end encryption mode, but beware: this is turned off by default, because that's the only way Allo's servers can see your messages and come up with intelligent responses. Enable Incognito and the smart features won't work.

• Group links: The more, the merrier. Share a link to add friends to your group chat.
• QR codes: Group chats are even easier to join. Have friends scan a code, and they're in!
• Bug fixes: Performance improvements for a better chatting experience.

Google Allo doesn't have as many features as some of the competition, and the lack of SMS integration and desktop or web app will put off some potential users. But it's a solid start, and we'll be interested to see where Allo goes next.