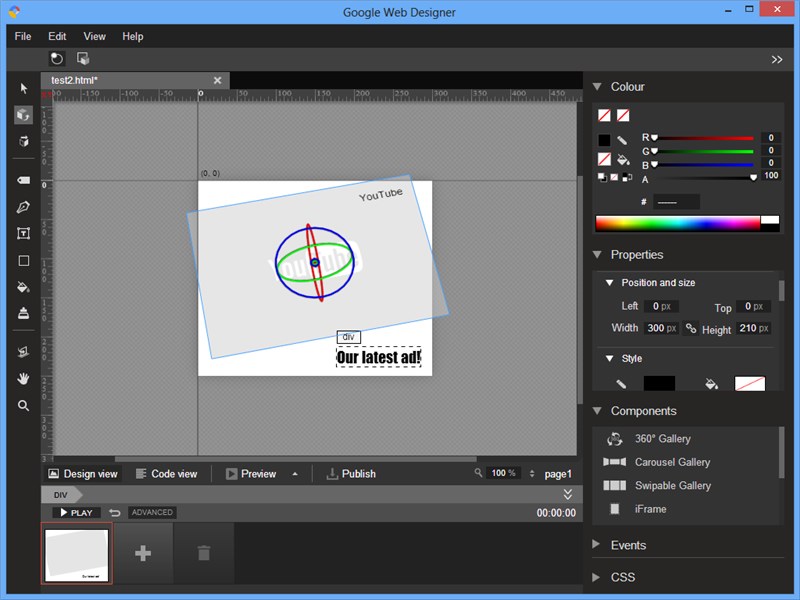 If you want your web code to be at once current and future-proof, you need to be coding in HTML5. If you’re unfamiliar with coding by hand, you’ll want some kind of app that provides a WYSIWYG interface, allowing you to build your web component using similar tools to those found in DTP and image-editing packages.

This is where Google Web Designer comes in. It’s aimed specifically at those building web advertisements using HTML5, CSS3 and Javascript – several presets for Google are provided including banner, expandable and interstitial, but it can be adapted to produce other animated content based on HTML5 too.

Not only does the tool provide you with drawing tools, text and 3D objects, it allows you to animate objects on a timeline too. And to help you crack on with your advertising project, Google Web Designer provides a library of components that makes it easy to add image galleries, videos, ad network tools and more.

Advanced users will also appreciate being able to switch to Code view for creating CSS, JavaScript and XML files by hand with the help of syntax highlighting and code autocompletion.

Everything’s laid out logically using an interface that will feel familiar to anyone with any experience of using third-party web design tools, with tools laid out on the left, the selected tool’s options in a toolbar to the top, a timeline below and panels to the right. You can easily switch between design and code view, preview your project in any web browser installed on your PC or Mac and finally publish your ad or video, ready for uploading.

Everything is slickly presented, and it won’t take long for anyone with experience of using design apps to create ads using the program. One of its strengths is that Google has coded it in such a way as to produce a single ad that will work across a variety of platforms – mobile and desktop – without having to be tweaked or recoded for each device.

Despite its clear focus on advertisers, the program may also garner a following among those keen to create small banner animations for other purposes, such as sharing content via social media.

A polished, smart tool mainly for producing web ads that work consistently across multiple platforms. Having said that, Google Web Designer may also appeal to social addicts looking for an easy way to generate polished banner animations too.