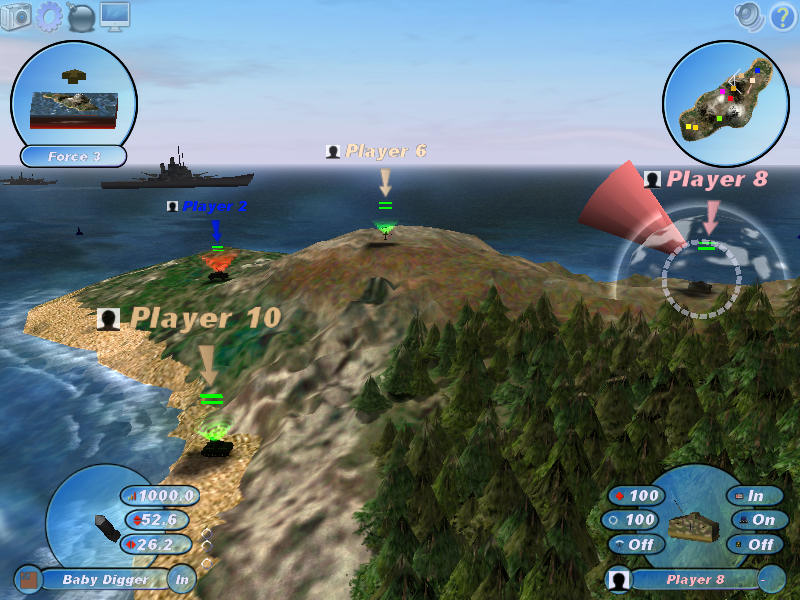 The gameplay is very simple. You're placed on an attractive 3D landscape with a number of other players (computer or human), then take turns firing weapons at your opponents until only the winner remains. You can't move, though (at least, not at first), so must keep adjusting your weaponry based on previous shots until you can hit your target: mastering this takes quite some time.

As your shooting skills develop, however, other elements of the gameplay emerge. Each hit and kill earns you cash that you can use to buy new hardware. There's a mountain of weaponry to choose from - napalm, lasers, nuclear missiles and more. Useful defences include shields to protect you from your opponents weapons, and batteries to repair damage. And fuel allows to move around, avoiding enemy shots while perhaps giving you a better shooting position.

This might be complicated enough with only 2 players. But Scorched 3D supports up to 24 computer or human opponents, on randomly designed 3D landscapes and user-designed maps, which means the action can quickly get very hectic indeed.

Please note: we've listed the game as running under Windows Vista and 7, as it appears to work just fine. However, these operating systems aren't officially supported by the authors, so you may run into occasional problems. Check the Scorched 3D forums if you need any help.

Beautiful graphics and addictive gameplay. Flattening your friends has never been so much fun