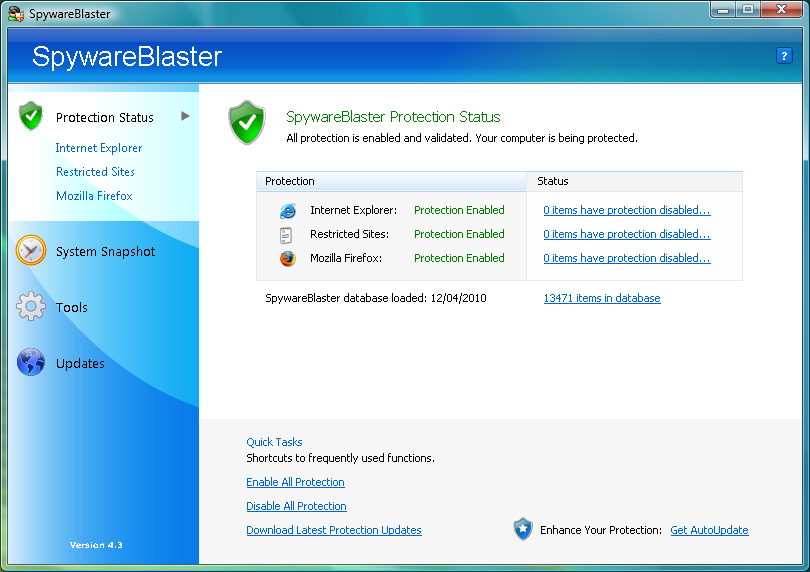 SpywareBlaster is a simple security tool that's designed to prevent the installation of spyware and other unwanted software.

The program works by setting "kill bits" in your Registry, which tell Windows which ActiveX controls you'd really rather not install. And so, even if a malicious website tries to force one on you, Windows won't accept the file and you'll remain safely uninfected.

SpywareBlaster also includes tools to restrict the actions of sites known to push adware. There's a module to block tracking cookies (this also works with Firefox and a few other browsers). And the program can take a snapshot of your browser and other system settings, for easy recovery later if they're affected by malware.

While useful, these tools aren't a substitute for a full antimalware tool. SpywareBlaster isn't designed to block viruses, for instance, and it has no way to detect new and previously undetected threats. It can't remove installed spyware, either.

Still, the program doesn't have to run in the background, so won't slow you down or cause conflicts with other security tools. Just run it, follow the instructions and you'll be a little safer online.

SpywareBlaster 5.6 ships with these changes:

Detect and remove spyware from your PC

Get an alert whenever spyware, adware or intrusive applications try to change your system settings

A quick and easy hash calculator