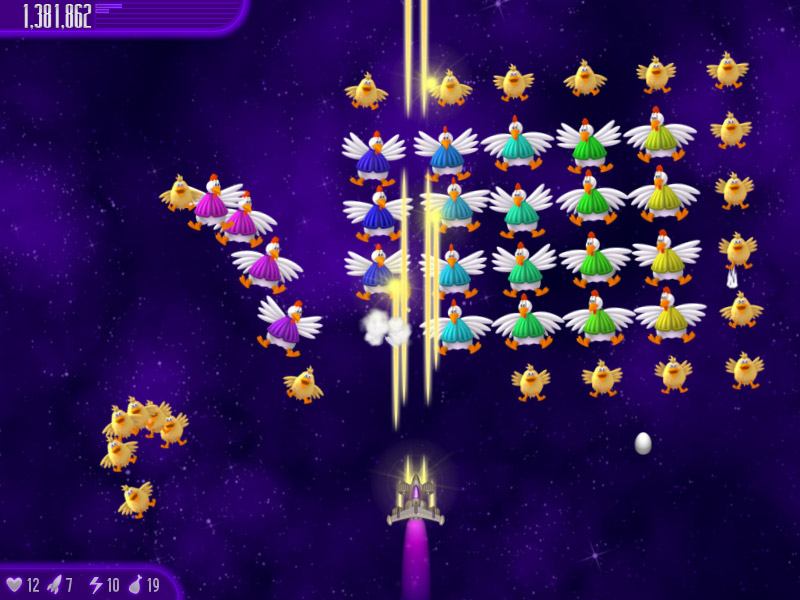 As you might guess from the name, Chicken Invaders is a Space Invaders variant (with touches of old arcade favourites like Galaxian and Phoenix thrown in), where you must defend the earth from hordes of multi-coloured chickens. No, really.

If you like this type of arcade-style game then there's a lot to enjoy here. The controls are easy to learn, the graphics are appealing, and it's fast paced, but with varying difficulty settings so the game remains fun, even as a novice.

There's also high quality audio and an excellent soundtrack, which if you've tried similar programs before you'll know isn't always the case. There's no irritatingly amateurish bleep-bleep "music" this time; instead you get an original orchestral soundtrack that sounds good enough to have come straight off some TV show.

And it really shouldn't get boring any time soon, thanks to features like the (up to) 4-player cooperative play, or multiplayer mode, that allows you to fight against competitors on the same PC, your local network or the web. Especially as you've also got weapons to discover, 30 unique bonuses to collect, 20 secret features to find, and 120 waves of invading chickens to conquer. (In the full version, anyway - the demo here is more cut-down, but if you enjoy arcade challenges it's still worth a look.)

While it's not exactly Civilisation, Chicken Invaders is a fun arcade game with plenty of extras and should keep you entertained for quite a while

Battle your way through space in this sci-fi shooter

Enjoy hours of retro arcade fun with this entertaining game