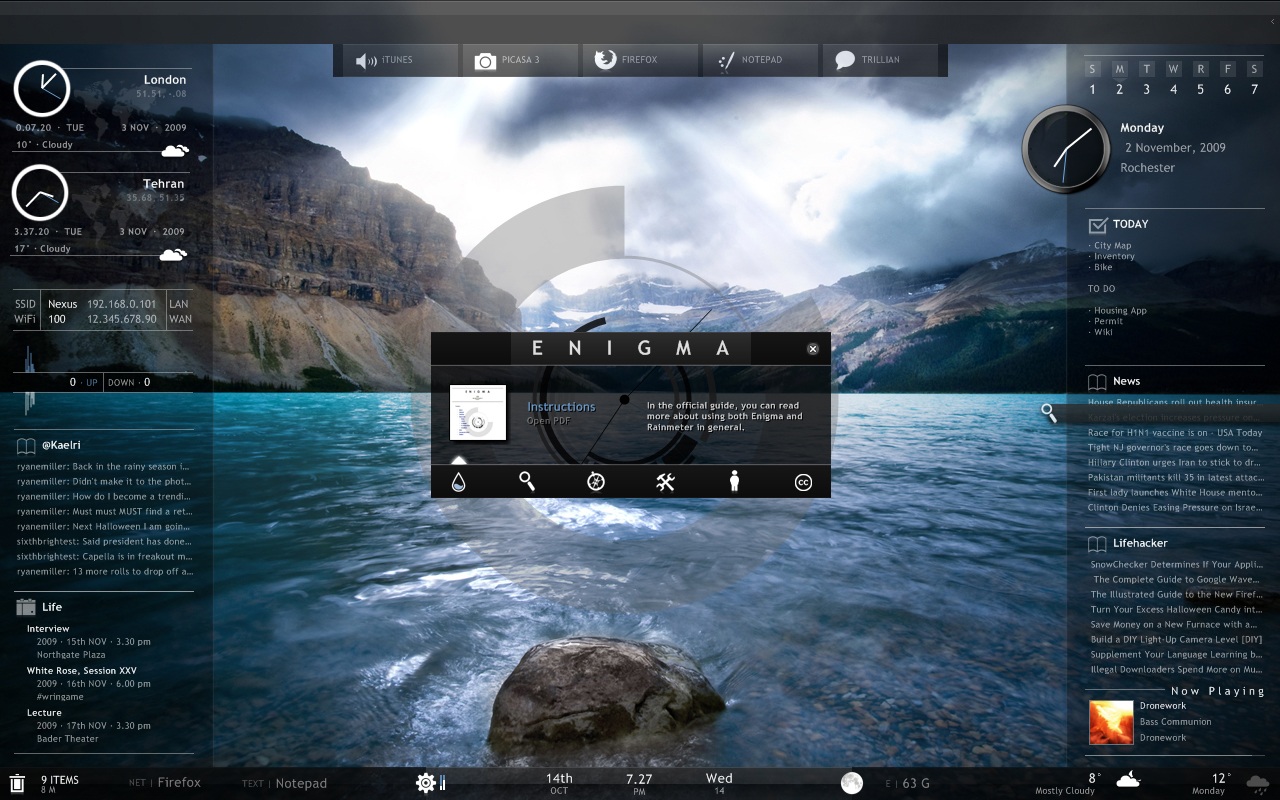 Customising your Windows desktop can be as simple or as complicated as you like. For most people, the options provided by Windows itself are often sufficient, while others want to push the envelope further. One way in which your desktop can be made to work harder is by using it to display all kinds of useful information – in Windows 7, there are specific gadgets that perform this function, but they’re limited and a little clunky to implement, while XP/Vista users are left completely in the cold.

This is the first Beta of Rainmeter 4.1.

No longer unreadable on a big screen
16 March 2014 04:06, Lawry McCarthy
@Ed, what is nonsense is countering a review more than 12 months after it was made and after a problem was obviously addressed. Also 1600 x 900 is not 1920 x 1200.
Mind you I should have added one more word in 2012 = "default".
The current version is different to the 2.2 version I downloaded and reviewed in Jan 2012. The default text is now readable on a 1920 x 1200 screen. Most people use the default text rather than editing a complex configuration file. My criticism was intended to be constructive I am glad the problem was addressed.
Unreadable on a big screen?
01 April 2013 14:54, Ed
@Lawry, that is nonsense, every rainmeter skin is fully editable whether it is yours or someone elses. Text too small? right click on the skin and select "edit skin", everything to edit is right there. I use 1600 x 900 screen resolution and have no problems whatsoever with rainmeter, you just have to know how to use it.
Rainmeter
16 January 2012 23:52, Carroll Donald
I LOVE RAINMETER! Very nice, ton of downloadable add-on apps, and if you like tweaking your system to your every aspect that can be twisted and bent... this is the program for you! And if you do install this, be sure to get Omnimo add-on, gives your system the new Windows 8 look and feel and totally customizable to what ever you want. If you don't mind editing a few config ini files then the sky is the limit!

I've been using Wincustomize/Deskscapes for a few years now and I am totally impressed what Rainmeter/Omnimo are able to do. Two Thumbs Up!
Unreadable on a big screen
11 January 2012 00:56, Lawry McCarthy
I installed this and found it to be a waste of time. All the the skins I found used tiny text that was virtually invisible on my 1920 x 1200 monitor. Ok you can do your own skin but that means you miss out on trying other skins.
Related Downloads Other Downloads From This Category

Bring desktop gadgets back to Windows 8-10