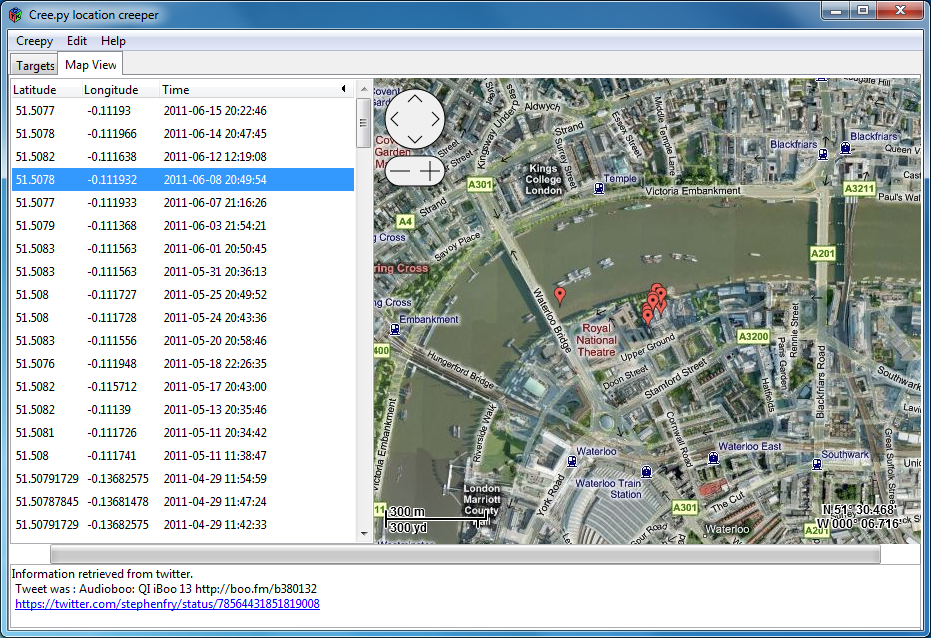 Creepy is a clever (and slightly scary) tool that will try to figure out the location of users from social networking and image-related information.

Enter someone's Twitter user name, say, and Creepy will retrieve all their tweets. Then it'll attempt to retrieve locations from each one, using the coordinates created when a tweet was posted from a mobile device; their IP address if the post was made on Twitter's web interface; geolocation information available through image hosting service APIs (if there are any image links), and EXIF tags from any photos posted. And any hits can be plotted on a range of maps.

The program supports a good range of image hosts: twitpic, yfrog, img.ly, plixi.com, twitrpic.com, foleext.com, shozu.com, pickhur.com, moby.to, twitsnaps.com and twitgoo.com. And there's also strong support for Flickr (in fact you can simply try to locate a Flickr user directly, no need to worry about Twitter user names at all).

The end result could be that, while you think you're posting on these services relatively anonymously, anyone else online may be able to use the information you've provided to figure out where you are (or, at least, where you've been).

Does it work, though? Only occasionally. If Twitter users have the "Tweet Location" feature (Settings > Account) turned off, never link to images, or don't include location information in those images then Creepy probably won't find anything at all.

There are exceptions, however. Searching for the Twitter name aplusk (Ashton Kutcher) returns a few New York locations; searching on BillGates returned one tweet from Long Beach; and trying StephenFry (UK actor and comedian) gave us 156 locations, from various locations where he was filming around the world.

This isn't exactly a program you'll use every day, then, but it is a good illustration of how careful you have to be to maintain your privacy online. If you have a Twitter or Facebook account then try it out on your user name, see how much information you're giving away. And in the meantime, make sure you've turned off location-related information on your phone, camera and tablet, unless you really need it (tap Settings > Location Services on iOS devices, say, and make sure any apps listed there are set up correctly).

Creepy is still in the early stages of development, and sometimes hangs for no apparent reason, as well as displaying other problems. When it works, though, it works very well, and is a scary reminder of just how much information we can inadvertently give away online

Capture images or videos of desktop activity, then share them online in just a few clicks

Creepy can report your every move