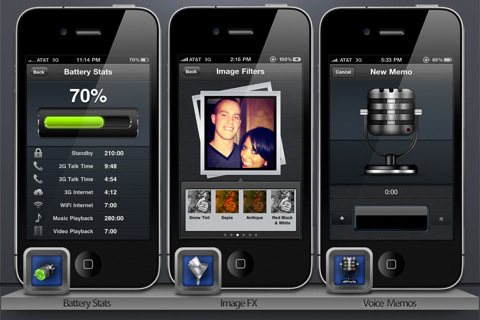 The phrase 'there's an app for that' is usually used to refer to the wide range of titles that are available in the iOS app store, but it could also be used to refer to the existence of Applets. As the name might suggest, this app is in fact a series of mini-applets bundled together into one handy package.

There free version of Applets includes 16 different tool that can be used free of charge, but more are available if you're willing to part with a little cash. For $0.99 you can add one of four expansion packs, but you can save a little money by opting to buy all four at the same time for $1.99. But here we are look at the free version of the app, and there is still plenty to investigate.

Of the 16 apps that are included in the bundle, some are useful and some are fun, while others are just a little silly. The alarm clock and battery gauge fall into the former category as does the system information tool and the Twitter updater. The Emoji component that adds extra symbols to your keyboard is a nice addition as well.

Other useful tools include the Date Calculator and Days Until Calculator, but other such as the fake text generator music timer and parking finder are going to be more of an acquired taste. Being free of charge, there's nothing to lose, and the expansion packs are cheap enough if something else takes your eye.

A fun and functional collection of tools and utilities that can be expanded cheaply and easily.