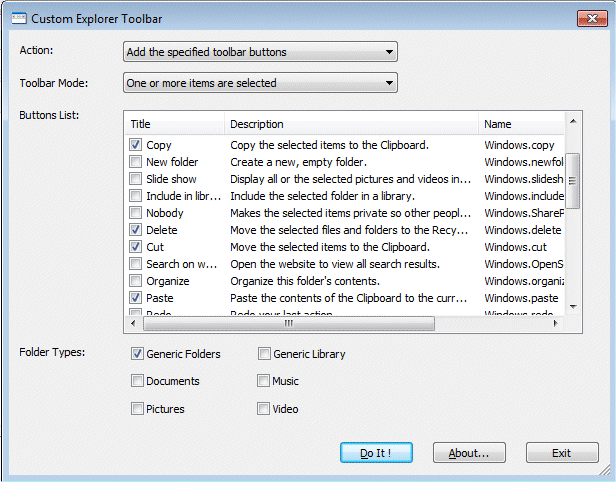 NirSoft's CustomExplorer is a small portable tool which allows you to decide the buttons you'd like on the Windows 7 Explorer toolbar.

Previous versions of Explorer had Copy, Cut, Paste and Select All buttons, for instance. They're not shown by default in Windows 7, but you can bring them back in just a few seconds with CustomExplorer: just launch the program, check the boxes you need, click Do It! and you're done. Click on a new file in any open Explorer window and the button should be available.

CustomExplorer can get much smarter, though. You can have particular toolbar buttons appear only when there are items selected in Explorer, for instance (check "Toolbar Mode"). And you're able to apply your tweak to particular folder types only. So you could have a particular button that appears only when you're viewing a folder of pictures, and you've selected some of them, but not at any other time.

Sometimes this complexity can become a little confusing, especially when, as the program's NirSoft page points out, "some buttons might not be displayed on Explorer toolbar, even if you add them with CustomExplorerToolbar tool". So you can spend a little time wondering why a particular button hasn't appeared.

For the most part CustomExplorer works well, though, and with a little experimentation you'll soon have Explorer working just as you'd like.

Windows Explorer really should allow you to customise its toolbar yourself. But until Microsoft get around to adding that feature, CustomExplorer does a good job of allowing you to tweak the toolbar to suit your needs

Get more from Explorer with this powerful shell extension

Add a Mac-like stack of shortcut icons to Windows