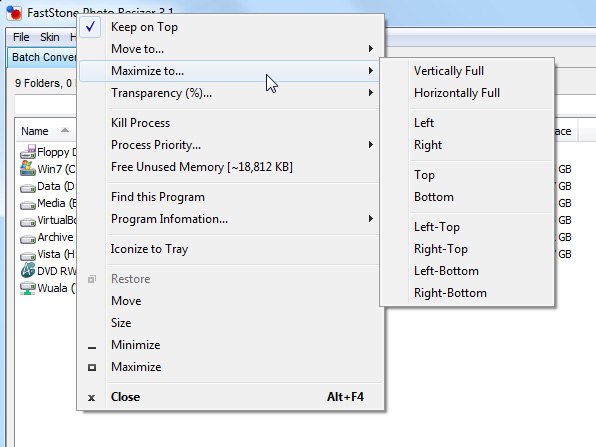 While each successive version of Windows has added new features and remedied problems and missing features with earlier releases, it’s always going to be the case that you won’t necessarily get all the features and functionality you’re looking for.

If you’re someone who regularly has loads of applications and windows open, you’ll find organising them all can be a pain. WindowMenuPlus fills this gap neatly, simply by adding a host of useful options to the context menu that pops up when you right-click the program’s titlebar or – Vista and XP only – its Taskbar window. In addition to the standard Windows options – Restore, Move, Size, Minimize, Maximize and Close – you now get a number of useful shortcuts, many of which are available in Windows, but not easily accessible.

“Keep on Top” ensures the window in question is always shown in front of other windows – perfect for small apps like Calculator, for example. “Move to” and “Maximize to” provide more options for moving and resizing the window in question, while Transparency (%) lets you blend the window in with the background, perfect if you don’t want an app to dominate the screen.

Advanced users will like the options to kill the window’s process, changes its priority and free up any unused memory. “Find this program” opens the program’s parent folder, while the “Program information” sub-menu reveals all kinds of useful information about it. You can also minimise the program window to the Taskbar’s Notification area to prevent windows clutter.

If you like the idea of some of these options, but not others, right-click the program’s Notification area icon and select the Show / Hide sub-menu to pick which ones to show and which ones to hide.

The biggest drawback of the program – aside from the fact it needs to be running for these tweaks to work – is that it doesn’t work with all program windows. Any application that bypasses the standard Windows controls – Office 2007/2010 and Google Chrome being just two examples – won’t get these options, which could be a deal-breaker.

An undoubtedly powerful and potentially useful application – shame it only works with standard program windows, though.