Clean up your hard drive and Registry at a click 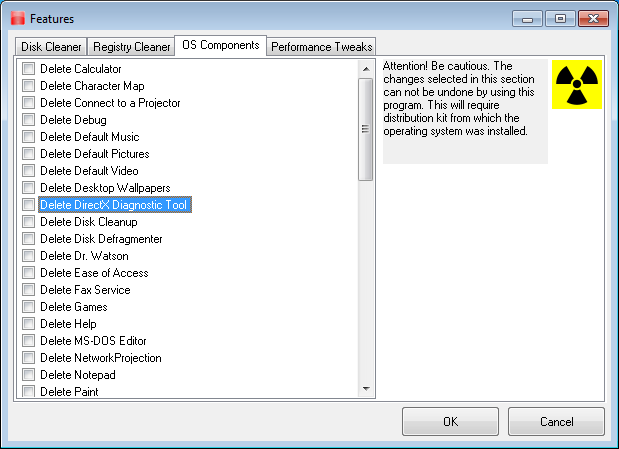 Red Button is a PC maintenance tool which aims to clean up and optimise your system in a single click (once it's been properly configured).

The program organises its functions into four modules. The best, by a considerable distance, is the Disk Cleaner: it's able to wipe Windows temporary files, and your internet tracks. There's support for deleting files based on their extension (*.tmp, * .log and so on), which can be risky but may also free up far more drive space. And you can specify your own files, folders or file patterns (*.$$$) to be cleaned. It's quite thorough as this type of tool goes, though horribly slow if you turn on every option: expect to be waiting for quite some time.

Next up is the Registry Cleaner, which is able to remove the usual broken Registry keys, application histories and so on.

The OS Components tab is a rather dangerous module which allows you to delete Windows components, everything from applets like Notepad, to key features like System Restore and Windows Update. There are options here which could seriously mess up your PC; this area really is best avoided.

And the picture is completed by the Performance Tweaks module, which is supposed to optimise Windows for you. By default this was set to disable Windows Defender, the Windows Firewall and User Account Control on our test PC, though, so there may be serious security consequences if you happen to be using these. Other options range from bogus tweaks which do nothing at all ("Automatically unload DLLs from memory") to others which will probably slow you down ("Disable Prefetch").

If you're a Windows expert who knows precisely what they're doing then Red Button may be useful, as it allows you to free up more hard drive space than many similar tool. Even here the program's slow speed and poor interface will prove annoying, though, and less experienced users should avoid the program entirely: it's just too dangerous.

Red Button can clean away more PC junk than most of the competition, but beware, that's only because it pushes beyond the boundaries of what's safe - make a mistake and the program could seriously damage your system.

Monitor, repair and speed up your PC

Optimise your PC in minutes with this powerful system maintenance suite

Clean, optimise, tune and tweak your PC to deliver its best possible performance

Clean, optimise and repair your PC with this familiar-looking maintenance suite