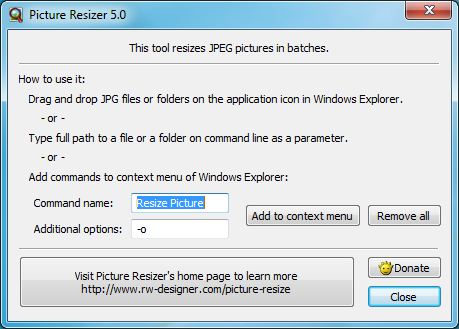 Picture Resizer is an interesting portable tool which makes it surprisingly easy to resize multiple images.

And this is because, at its simplest, there are no dialog boxes to explore - everything the program requires is contained in its own name.

The default file name, for instance, is PhotoResize400.exe. The "400" tells the program it should resize your target images to be 400 pixels on the longest axis. And so if you drag and drop a bunch of images onto the file, that's exactly what it will do, resizing those images and saving the reduced versions alongside the original (so "picture.jpg" would become "picture-400.jpg").

You need to resize your images to 640 pixels, say? Right-click PhotoResize400.exe, select Rename, change it to PhotoResize640.exe - job done. Now drag and drop your photos onto the file and they'll be resized accordingly.

Picture Resizer can do much more than this, but that's where life becomes more complicated.

If the file is called PhotoResize_400.exe, say, then it'll resize the minimum side of your image.

A file called PhotoResizeP50.exe will resize its target images to 50% of the original.

PhotoResizeG1024x768.exe will use content-aware resizing to change the aspect ratio while preserving the content.

While PhotoResizeA400x300.exe will crop the borders of the image, resizing what's left to 400x300.

Plainly setting up these individually will take some thought, so if you never need to run the same resizing task twice then the program probably won't be for you.

If you always need to resize large numbers of images to the same target dimensions, though, Picture Resizer should be able to save you a lot of time and effort. Give it a try, see what it can do for you.

Picture Resizer is a handy tool which carries out simple resizes with great ease. And it has some more sophisticated features available, too, although these require considerably more thought to configure.

Save bandwidth, time and effort by automatically resizing images whenever you share them online

Resize a window or tweak its transparency with your mouse wheel