Audit the software installed on your network from one central location 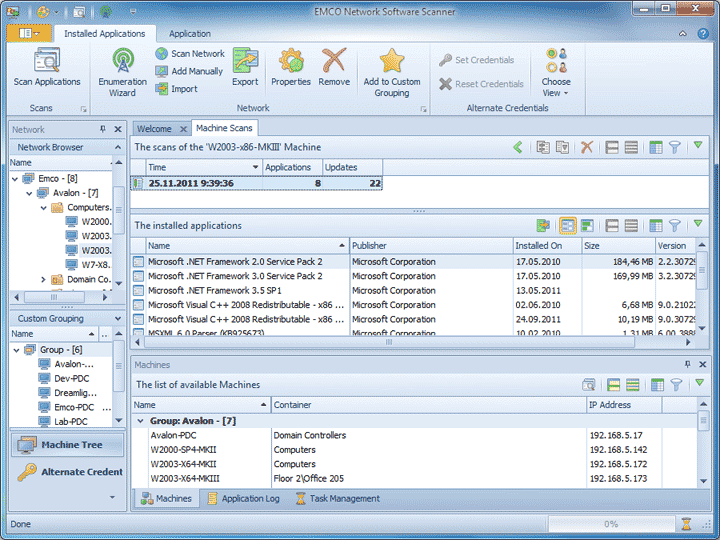 EMCO Network Software Scanner is a handy management tool which can collect details on the applications installed across your network.

The program doesn't require any special clients to be installed on your network PCs for it to run, and it doesn't use WMI. You will need to provide it with the credentials for administrative access (so you'll need an administrator account on each system), but with that in hand all you need to do is point EMCO Network Software Scanner at a group of PCs (or let it scan everything) and leave the program to work.

Once the process is complete then you'll see the installed applications on each system, and their update status. So if some computers are missing a few key updates then it'll be very easy to spot.

The reports are also saved into a database for easy access later. And if you run the scan again a month later (for example), it's easy to compare the new results with the previous scan to see which applications have been added or uninstalled.

And although it's free, EMCO Network Software Scanner doesn't have any annoying restrictions on the size of network it'll scan: it'll work happily on networks of thousands of computers.

The below features have been introduced for the first time or significantly improved in this release:

A capable auditing tool which could be very useful, if your network is configured suitably (check the System Requirements)

Quickly find out more about the devices connected to your network

Easily collect the MAC addresses for all your networked PCs

Get a basic software inventory for any PC on your network