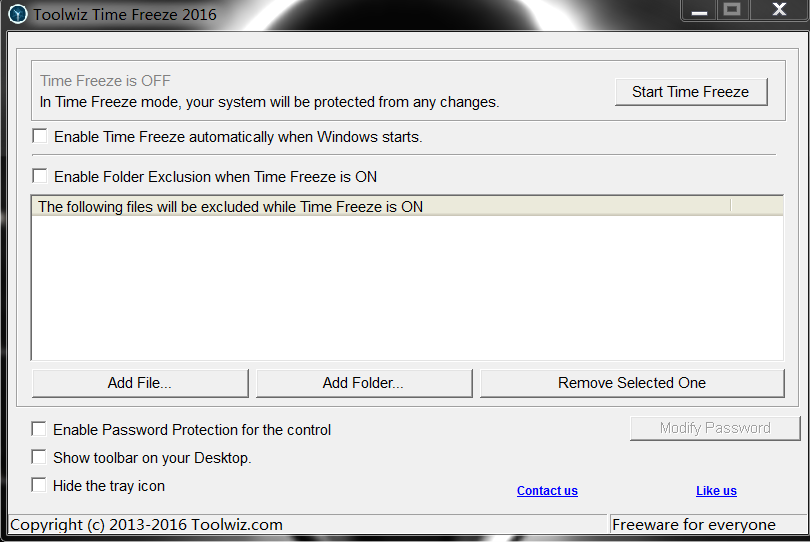 If you’re the kind of person who frequently has to test software, or enter dangerous parts of the internet, you’ll know that over time your computer will become bogged down or – worse still – infected, forcing drastic cleanup measures that could result in a reinstall, all because of five minutes foolhardiness.

Imagine, then, being able to press a button to put your computer in effective stasis. You can then browse the net or install applications for testing purposes with no fear of the consequences – once you’re finished, reboot and your computer returns to how it was before you pressed the magic pause button.

Toolwiz TimeFreeze is a program that does just that. Once installed, it sits unobtrusively in the Taskbar’s Notification area, waiting for you to summon it with a single click. Click the Start TimeFreeze button, confirm your choice and the program will do its magic, effectively putting your Windows partition into stasis while TimeFreeze is running. You can then mess around to your heart’s content.

When you’re finished, simply reboot or stop TimeFreeze (at which point you'll be prompted to reboot). All of the changes to your system implemented since TimeFreeze was switched on will be undone. Previous versions of the software gave you the option of keeping any changes you made, but this feature has sadly been lost in version 2.2. Also lost is File Protection, a tool that allowed you to protect specific non-system folders and files from being touched during testing.

You can, however, instruct TimeFreeze to exclude specific folders from its protection when running, typically your own user data folders.

The main drawback you’ll find is that TimeFreeze automatically wipes its cache during a reboot, so you can’t use it to test software that requires a restart as part of the installation process. Also, the system cache cannot be larger than 4GB in size (free drive space permitting), which means if you make more than 4GB of changes you’ll come unstuck. However, as TimeFreeze is designed to be used in short bursts, we can’t see this being a problem for the vast majority of users.

Version 2.2.0.6000 brings:
• Fixed the issue in the command line.
• Add a new option to hide the tray icon.
• Improved the engine for better performance.

A quick, simple and reasonably effective way of protecting your computer while testing new software or opening up your PC to risky endeavours.