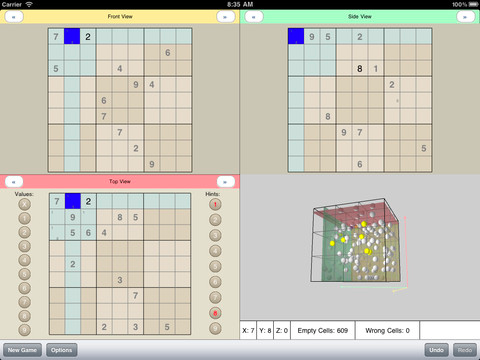 Sudoku is a puzzle that has taken the world by storm and since its sudden increase in popularity there have been all manner of variants on the theme. Most these variations have been designed to add an extra level of difficulty to the puzzle, and this is something that can also be said of 3Doku. The traditional puzzle involves working with a two dimensional grid measuring 9 by 9 cells – in 3Doku, an extra dimension is added and you have a 9 by 9 by 9 cube to work with.

The beauty of Sudoku puzzles is that they can all be solved if looked at logically. Some puzzles may take much longer to complete than others and require you to think several moves ahead, but if you are willing to persevere, you should always win through. If you have been solving puzzles for a while, you may well have found that you can breeze your way through them pretty quickly. If you’re looking for more of a challenge, 3Doku could just be the game for you.

A puzzle comprises 27 individual Sudoku boards; 9 in the X plane, 9 in the Y plane and 9 in the Z plane. This means that any cell you select is actually part of three different boards so making a mistake with one number could have a far great knock on effect. If you start to find that things are just too tricky, you have the option of enabling hints so you will be warned if you enter an incorrect number in a particular cell.

Even if you are season Sudoku solver, this is a game that is going to take some getting used to. The extra dimension adds a new level of complexity and means that individual puzzles are going to last you significantly longer. The idea of solving a three dimensional in two dimensions can take a little getting used to, but once you have grasped the concept of how the puzzle is constructed you can start having fun as you stretch your brain to its limits.

A superb update to a classic puzzle, 3Doku is a great and challenging twist on an old idea.

Simple task management app that is quick and easy to use