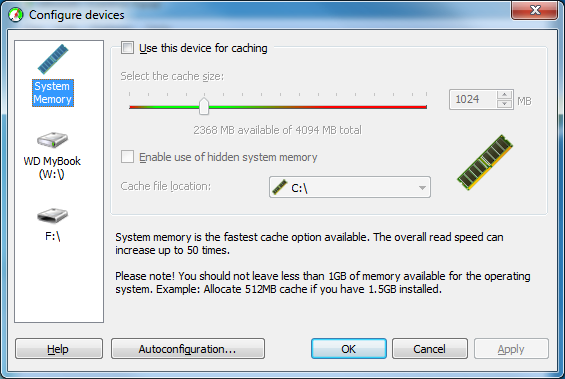 Adding itself to the ever-growing list of performance boosting software that is available for Windows, eBoostr harks back to the days of Windows 95 and Windows 98 when memory management tools were all the rage. Something that is frequently said about computer is that it is not possible to have too much memory. To supplement any RAM you have installed, Windows 7 introduced ReadyBoost which allowed for the use of a USB drive as virtual RAM.

eBoostr is a memory and cache management tool that can be used to configure up to four devices to be used in a similar way – and you can use USB and non-USB devices. The program work by essential pre-caching the files used by the programs you used most frequently so they can be loaded faster when they are needed. This is nothing new but eBoostr does add the ability to choose which of your programs should be given the highest priority.

While there is some benefit to using the app, some of its claims are a little far-fetched. The program’s web site correctly points out that 32-bit versions of Windows are not able to access more than 3.25GB of RAM, and goes on top suggest – although not explicitly – that eBoostr can make use of RAM beyond this limit. This is simply not the case and it is one of the reasons software that makes performance boosting claims have been regarded as snake oil. Techniques can be used to emulate use of this memory, but little more than this.

If you view the program as a slightly more intelligent version of Windows’ own ReadyBoost feature, then you’re not going to be too disappointed. Benefits can be gained by laptop users as making use of USB drives is far less power-hungry than running a standard hard drive. There is a trial version available that enables to test out the features of the program for two hours at a time, but your time and money would most likely be better invested in buying additional RAM and a solid state drive for your computer.

We’ve looked at this program quite critically, and while it will bring some benefits to some systems, it is not replacement for hardware upgrades and is a little too expensive for what it is.

Test the speed and performance of your iPhone or iPad

Speed up Windows by optimizing the handling of memory and caches