Edit, convert and work with all your media files 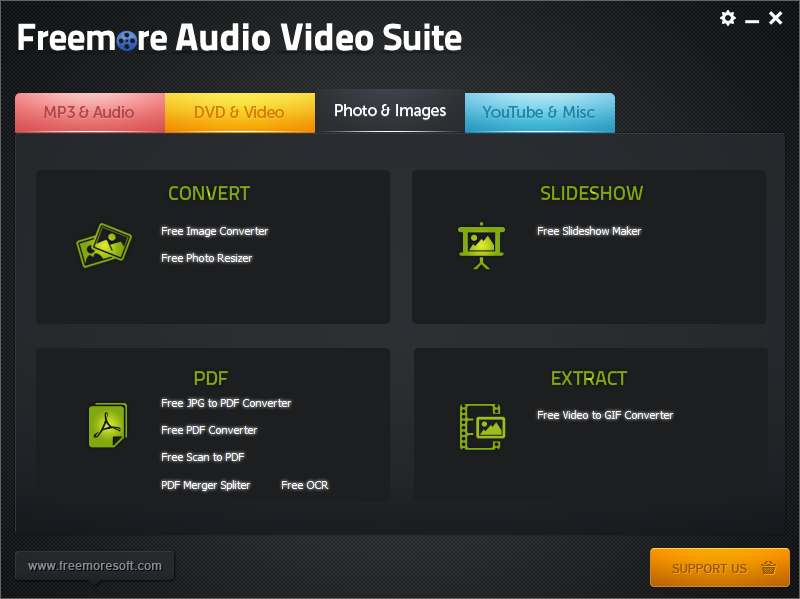 Freemore Audio Video Suite is a free collection of tools which aims to help you edit, convert, and generally handle all your audio and video files.

After a simple installation (though look out for the adware), the program's central launcher appears. This has more than 30 links to the suite's core tools, each organised into sections such as MP3 & Audio, DVD & Video, Photo & Images, YouTube & Misc. These include an audio editor, a media converter, various split and join tools, a slideshow maker, PDF converter and YouTube download app.

While initially this looks impressive, you're not getting quite as much as you think here. The "DVD & Video" section has 9 links to conversion options of various types: "Video to Android", "WebM to MP4", "MP4 to AVI" and so on. These aren't separate tools, though, and each link just launches the same central converter with different defaults.

Other tools are more basic than we hoped. So the DVD Creator, for instance, is best at burning VCD and SVCD discs; it can only burn DVDs from DVD Video folders.

And some of the links you'll see just tell you that they're "not currently available in the free version". So even though they're titled "Free Image Converter", "Free Online Radio Player" and "Free Online TV Player", they're not really "Free" at all.

If you already own the best-of-breed freeware media tools (the various Freemake programs, say) then Freemore Audio Video Suite probably won't appeal. If you're starting with a new PC, though, or just don't know what to install, then the suite provides a quick and easy way to equip your system with some genuinely useful media functionality.

Please note, the suite will by default install adware along with its own files. Pay close attention during setup and clear checkboxes, click "Decline" etc as appropriate.

Its features are occasionally a little basic, but Freemore Audio Video Suite does provide some good media functionality for novices, particularly in its conversion tools