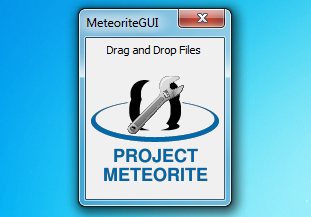 Meteorite is a basic but extremely easy to use video repair tool which can fix a few issues with corrupt MKV files.

This kind of program can often be intimidating in the extreme, packed with jargon and complex settings, but Meteorite is different. Very different. It barely has an interface at all, for instance, and there's no configuration involved, no options to consider: just drag and drop your MKV file onto Meteorite, and if possible the program will rebuild a new version with "meteorite." added to the file name ("meteorite.name.mkv"), saving it in the same folder.

Does it work? The program only addresses a few problems, so gave very mixed results in our tests, recovering a small number of files but leaving most entirely unchanged.

And while you might expect this from a "version 0.11", the GUI could still be more helpful. If you drag and drop an MKV file onto the program, and it's sufficiently corrupted that Meteorite doesn't recognise it, for instance, the natural next step should be to report that, displaying an error message of some kind. But Meteorite simply does nothing. At all.

Still, considering the complexity of what Meteorite is trying to do, it seems unreasonable to complain too much. Especially when the program is entirely free, with no adware issues or other unwanted payloads, is so compact and convenient to use (it's a single, portable executable, barely more than 1MB in size), and does work at least sometimes. If you regularly download MKV videos, then we'd a copy around, just in case you ever have playback problems.

It can only repair a few MKV problems, but Meteorite's simplicity and ease of use mean it's still worth including in your video troubleshooting toolkit

Convert your DVDs and Blu-rays into MKV files