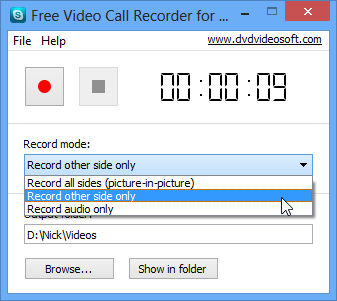 There’s no doubt that Skype is a powerful communications tool, but one of the biggest restrictions comes when you want to record conversations. Free tools exist, but are usually cut-down or limited in some way, which is fine for short calls, but less helpful if you want to record a lengthy chat.

Free Video Call Recorder for Skype is one of those “does what it says on the tin” tools – it’s free, records video and audio Skype conversations and there are no strings attached. It supports three recording modes: audio only (both sides), video of the other side only, or picture-in-picture for recording video from both sides of the conversation.

It’s ridiculously simple to use: choose what you want to record, pick an output folder to store the finished recording in and click Start. You can pause the recording at any point, or click Stop when you’re done. If recording video, the app will automatically wait until the video conversation starts before switching recording on.

Audio recordings are stored in MP3 format, while video is stored in the Apple-friendly MP4 format. This helps keep file sizes down, and MP4 files should play back okay in Windows using Windows Media Player – if not, consider converting them or using a tool like VLC Media Player.

Unlike other tools, Free Video Call Recorder for Skype isn’t integrated into Skype itself – it’s designed to run alongside it. There’s also no indication to the other party that they’re being recorded, so it’s up to your conscience to determine if you let them know you’re recording them.

The tool does what it does admirably – and all without making things unnecessarily complicated. It would be nice to have a choice of recording formats, but if you’re looking for a quick, easy – and above all free – way to record your Skype conversations, this is the tool for you.

Refreshingly simple, but effective free tool for recording both audio and video calls in Skype.

Send money via PayPal from Skype (but would you want to?)