Collaborative social video tool from the founders of YouTube 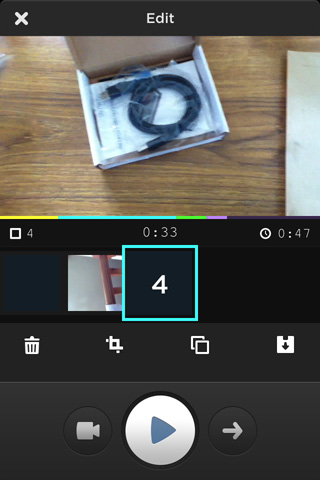 Vine, Instagram et al have really shaken up video and social networking, so perhaps it’s no surprise that the co-founders of YouTube have decided to get in on the act with this, their entry into the crowded world of social video.

The good news is that they’ve clearly not been standing still since inventing YouTube, as MixBit offers some novel ways of capturing, editing and sharing video with others. Like Vine, individual video clips are shot in short bursts – up to 16 seconds, but unlike Vine you can then stitch together these clips to create a video of up to an hour in total, which can subsequently be shared via Facebook, Twitter or email.

Clips are stored as independent elements, but play as one seamless video – they can be duplicated, trimmed, deleted or rearranged at will, all from your iPhone’s screen with a few taps or drag and drops.

It’s simple enough. Flick through the orientation wizard, then start building your own videos. You’ll immediately see videos contributed by other users (emphasising the public nature of MixBit), which you tap to view in their entirety or to grab individual clips from.

Alternatively, tap the + button to start shooting your own clips. It’s a little fiddly – you’re prompted to shoot in landscape mode for best results, but must tap and hold on the screen to record your footage, which can make demos and so on a little fiddly. Still, it’s easy to reshoot takes and then delete botched clips later.

Once your clips have been shot you can edit them using the controls – trim unwanted elements, duplicate for extended repeat shots, drag to a new position on the timeline or ditch entirely. Once you’re happy with your creation, publish it to the MixBit site for others to enjoy, plus share it with friends.

It’s pretty simple and straightforward to use – 16-second clips give you that bit more time for each shot, and the ability to stitch up to 256 together in a single movie coupled with reusing other people’s clips could ensure MixBit has a bright future.

Does the world need yet another social video clip creation tool? MixBit has enough about it to suggest that it might just.

iPad-compatible, but optimised for iPhone and iPod touch

A music player with a distinctly social twist