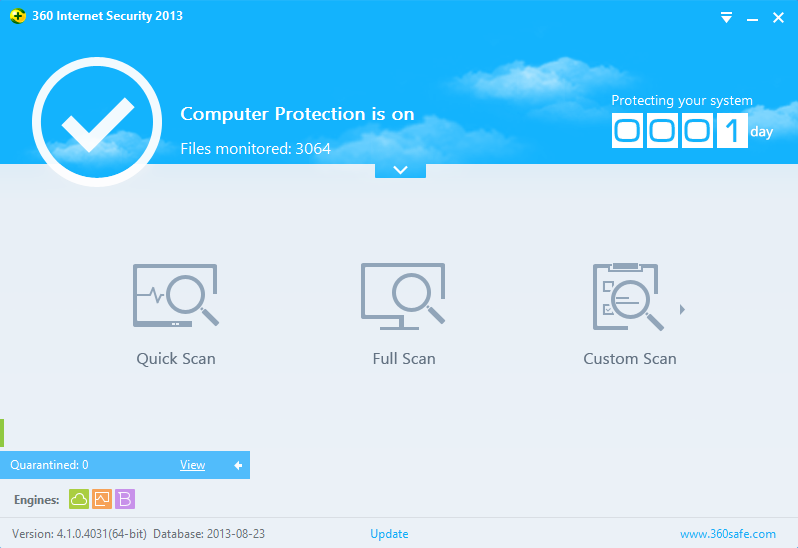 360 Internet Security is a free antivirus application (not a suite, despite the name) from the Chinese company Qihu 360 Software.

The program provides a good range of features, with on demand scanning, real-time protection, antiphishing and privacy protection modules. All of this is supported by three antivirus engines. Qihu provide two - a "360 checksum based cloud" and "machine learning QVM" engines - and, notably, you also get the BitDefender engine. The end result isn't bad at all for a free antivirus package, with AV-Test recently ranking the program as broadly equivalent to the protection of Avast, Avira and AVG's engines.

In practical terms, the program got off to a bad start with us, claiming that there "wasn't enough free hard drive space" to install (there was more than 2.5TB).

We switched to another drive and the installation proceeded without problems. You're not forced to remove "incompatible" products, and there's no need to reboot: just wait and in a moment or two 360 Internet Security's attractive and straightforward interface will pop up.

We tried some scans, and they were a little slower than we might normally expect. Our test samples were all detected, but the program also seemed prone to generating false alarms. It seems the developers perhaps realise this, as detected threats aren't automatically removed, and you can click a "later" button to postpone any action.

If you're happy with this, though, there's nothing else to do here: just close the program window, and 360 Internet Security carries on running in the background, doing a generally good job of protecting your PC from harm.

360 Internet Security 2013 looks good, is easy to use, and provides antivirus protection which is comparable to or better than several of its big-name free competitors

Detect some hidden malware in seconds