Turn your mobile into a digital voice recorder 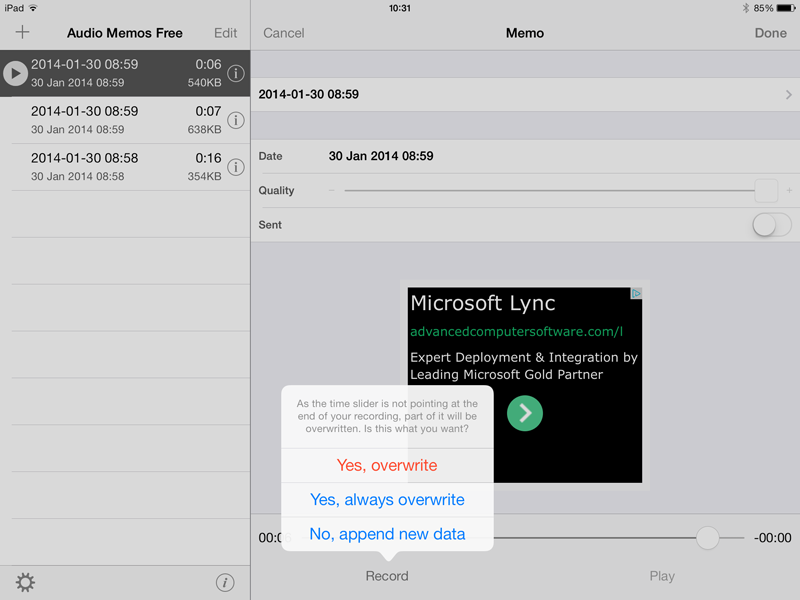 One handy use for mobile is as a voice recorder. Why carry two bits of tech into that lecture or meeting when – armed with the right app – you can use your tablet or phone instead?

Audio Memos is one of a growing number of voice recording apps, and works like others of its ilk. It comes in three versions: Audio Memos Free is a cut-down. ad-supported version offering basic recording and sharing functionality only, Audio Memos costs 99c and adds more sharing options, plus allows you to append new audio onto existing recordings. Finally Audio Memos Pro contains a wide range of features and tools, but will set you back $9.99, although you can pick-and-mix what advanced functionality you want via a series of in-app purchases in Audio Memos.

If you want to road-test its core functionality first, try this free version. It offers basic recording and playback with limited editing capabilities – you can overwrite parts of your recording by placing the slider in the correct place, or append new audio to the end of it.

The app also allows you to amplify your recordings if they’re likely to be quiet, plus use a normalize setting to keep the volume level consistent between recordings. Audio Memos is also capable of continuing a recording even when your mobile goes into sleep mode.

You can export your recordings one of two ways in the free version – via email, or by a built-in file server over your local Wi-Fi network (iOS only). Email recordings are limited to a maximum of 3MB in size – as Audio Memos uses the WAV format, this can be quite restrictive, although you do get a choice of three quality settings to try and squeeze more from your recordings.

You can also transfer recordings to your PC or Mac via Wi-Fi using the built-in file server. Once switched on via the iOS app’s settings, click this link in your computer’s web browser to play and download your recordings.

This paid-for version the app removes this limit, plus adds some additional functionality for iOS users, namely the ability to transfer files via USB and iTunes, plus support for multi-tasking, so Audio Memos continues to record in the background even when you’re using another app.

There are also a number of in-app purchases offering a subset of the functionality available in the fully blown Pro version, including support for markers (the only additional purchase for Android users), trimming, voice and timer activation, and the ability to compress recordings.

Although lacking advanced features, Audio Memo Free has some decent editing tools and you can easily offload your recordings to your computer via Wi-Fi.

A small but easy-to-use and bit-perfect audio editor

iTranslate for Mac 1.0 translates words, sentences and phrases from your Mac’s menu bar.