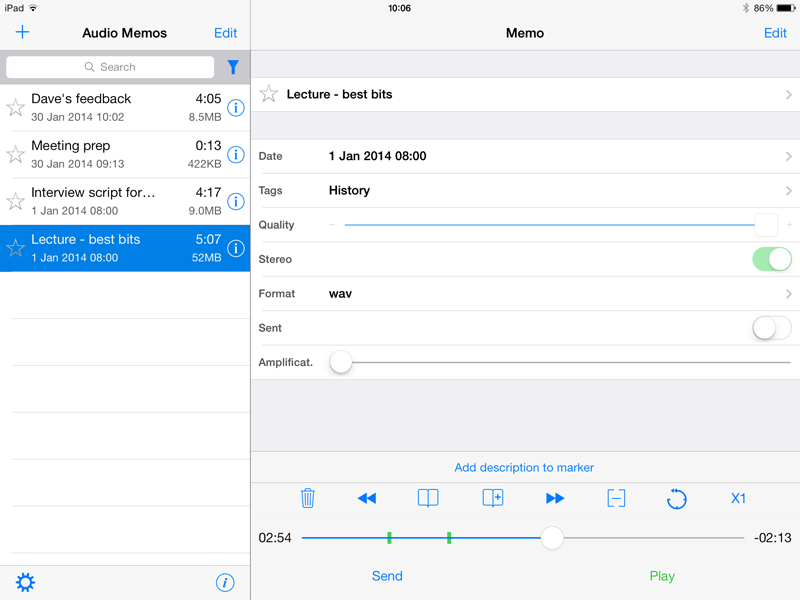 One handy use for mobile is as a voice recorder. Why carry two bits of tech into that lecture or meeting when – armed with the right app – you can use your tablet or phone instead?

Audio Memos is one of a growing number of voice recording apps, and works like others of its ilk. It comes in three versions: Audio Memos Free is a cut-down. ad-supported version offering basic recording and sharing functionality only, Audio Memos costs 99c and adds more sharing options, plus allows you to append new audio onto existing recordings. Finally Audio Memos Pro contains a wide range of features and tools, but will set you back $9.99, although you can pick-and-mix what advanced functionality you want via a series of in-app purchases in Audio Memos.

Audio Memos Pro goes beyond the basic functionality found in the free version to add advanced functionality including support for voice and timer activation, compression of recordings, a wider range of sharing options and support for inserting position markers, which allows you to annotate your recording with descriptive text and even photos.

The editing tools are also more sophisticated with the ability to trim existing recordings as well as insert new audio into the middle of an existing recording. The big issue with the Pro version is the price – it’s just too expensive. Rival apps cost significantly less and offer a similar set of features, while we’re also left cold by the app’s interface – even though it’s gone for the simple look of iOS 7, it still manages to come across as fussy and complicated in places.

Although packed with plenty of interesting - and useful - features, Audio Memos Pro doesn’t have enough to lift it above its peers, particularly at this price point.

Turn your mobile into a digital voice recorder

A small but easy-to-use and bit-perfect audio editor

iTranslate for Mac 1.0 translates words, sentences and phrases from your Mac’s menu bar.