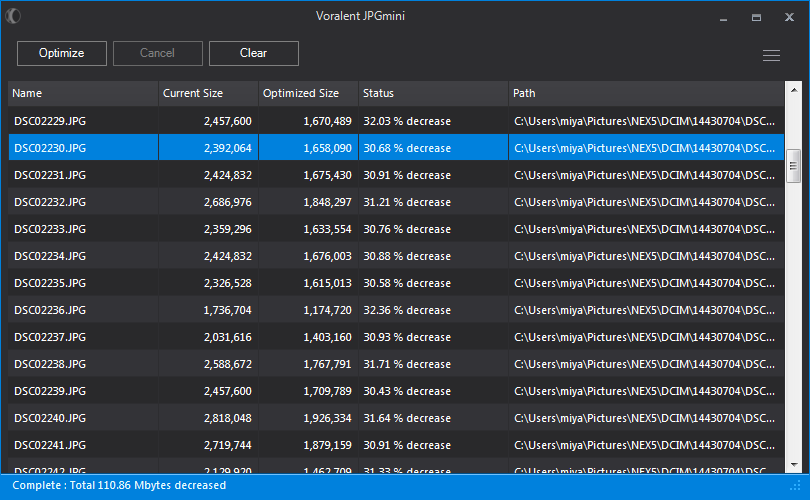 JPGmini is a simple free tool which can reduce the size of JPEG files, without any loss in image quality.

The program is very straightforward to use. Drag and drop your source images onto the JPGmini window, click "Optimize", and watch. JPGmini will process and rewrite each file in turn, displaying exactly how much space you've saved.

(Pay particular attention to the word "rewrite" here: JPGmini replaces your source images. It has a "Backup" option which tells the program to create .BAK copies of the original images, but the safest approach is to only ever give it copies of your source files.)

JPGmini gives you a little control over the compression process. You can choose to remove EXIF data, for example, or create Progressive JPEGs dependent on the source files, just by checking a couple of boxes.

But is it worth the effort? We gave the program our test set of 100 web graphics, small JPEGs extracted from real websites, which you'd expect to be reasonably well compressed. But JPGmini found plenty of scope for improvements, reducing their total file size from 412KB to 340KB. That's an impressive 17.57% cut, better than most of the competition.

We then passed the program our 25 HD photos, 76.5MB in total, and JPGmini cut these to 69.8MB. That's "only" an 8.85% saving, but it's still more than enough to be useful, and again it's enough to put JPGmini alongside the market leaders.

An excellent JPG optimizer, very easy to use, and with impressive compression rates. Just keep in mind that it overwrites your source images: always work with copies.

Shrink your JPEGs without losing any image quality