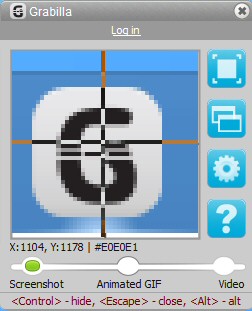 Launch the program on Windows and you're able to define a freehand rectangle to capture. A zoomed view shows the area around the mouse cursor, and its X and Y coordinates are also displayed, handy if you need precise positioning. Video, animated GIF, active window and full screen captures are also just a click away.

The finished file may be saved locally, but Grabilla can also upload the capture to its own private server. There you're able to annotate it further, get links to share it, embed the screenshot or post it in forums, and there's even a one-click option to create a short URL and QR code.

Explore further and you'll find even more options. A web capture bookmarklet enables you to save web pages from Chrome or Firefox. Grabilla can be used to share other files, not just captures, within a fairly strict size limit (20MB, 300MB for videos). A History page keeps track of what you're doing, too, although to access this from anywhere you must sign in with a Facebook, Google+, Twitter, Yahoo or LinkedIn account. (If that doesn't appeal, no problem - most of the site's features work just fine as an anonymous user.)

Grabilla's interface has some quirks, and video recording didn't work at all on one test PC. The plus points win out, though - configurability, online annotations, capture sharing features, cross-platform - and on balance the program gets a qualified thumbs up from us.

Automatically save a screenshot at regular intervals