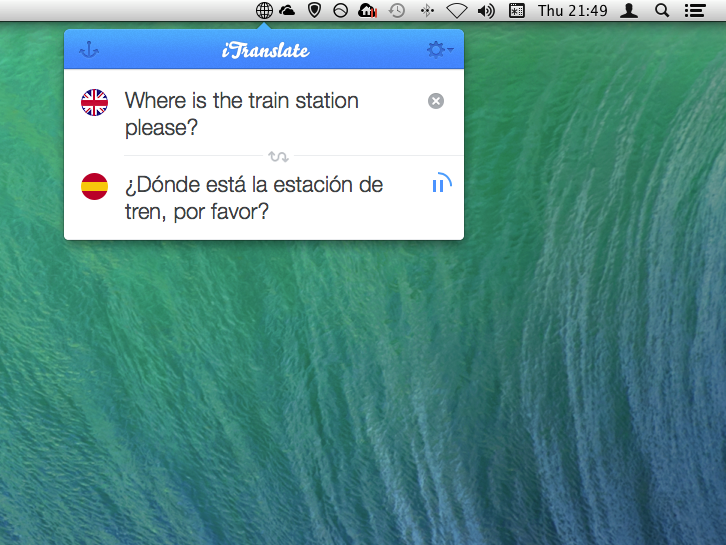 If you spend your time hurrying off to a foreign-language dictionary or employing the services of an online translator, then iTranslate will come as a big relief. It’s a simple app that sits in your menu bar ready to leap into action the moment you click it.

After installation, you’ll be prompted to start the app automatically with your Mac, then define a keyboard shortcut that triggers the app into action. Once set up, launch the app via this shortcut or its menu bar icon and you’ll see two input boxes with country flags next to them.

Type your word, sentence or phrase into your own country’s box, press [Enter] and after a short pause iTranslate will provide the written equivalent in the target language. You can also hear it spoken by clicking the appropriate button next to the phrase.

If you type a single word rather than a sentence and if there’s more than one meaning attached to that word, iTranslate will provide different translations based on those meanings. You can also switch source and destination languages by clicking the squiggly arrow between the original and translated line. Right-click the original text or its translation to access more options, including the ability to share it via email, Messages, Twitter or Facebook.

Change source or target language by clicking the appropriate flag, then browsing the list of supported languages (80 in total) or searching for a specific tongue.

iTranslate follows on the heels of the iTranslate Voice for iOS and iTranslate for Windows 8. It clearly utilises the same cloud-based technology that works so well with its siblings, although naturally some languages are better supported than others.

Perhaps the biggest disappointment is the price – unlike the Windows 8 version, which offers a free ad-supported version, you don’t even get an option to trial the software first. And at $9.99, we feel it’s a little too expensive for what it offers, however impressive that is.

It’s a shame about the prohibitive cost, as iTranslate for Mac offers a simple, quick and very effective tool for translating between different languages.