Better-than-zip archiving from the command line 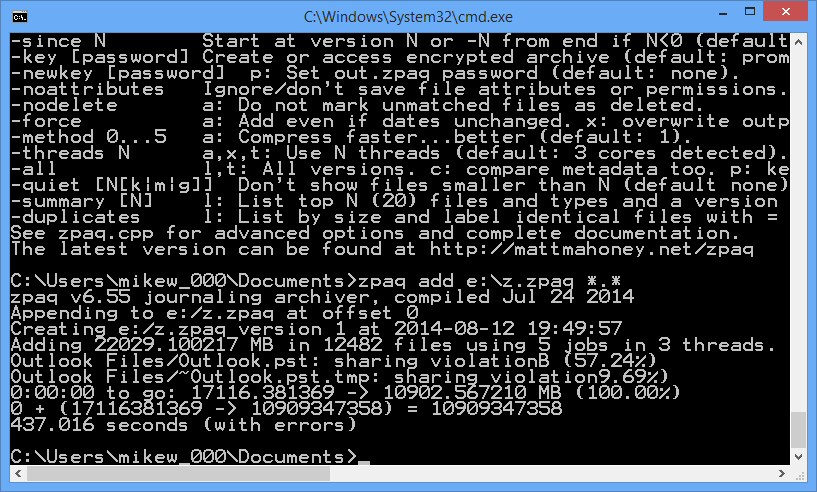 ZPAQ is a command line archiving tool which supports the zpaq format. That's not the most appealing of opening lines, we know, but wait - it's better than you think.

The program is easy to use, for instance, at least by command line standards. A command like  zpaq add e:\mybackup.zpaq c:\users\myname\*  is all you need to back up your user folder.

This isn't just some very basic "copy" process, either. ZPAQ supports incremental backups, so issue that same command a week later and it'll update your archive with only new or modified files. Better still, those updates don't replace the originals, rather they're tagged on to the end of the archive, which means you're able to restore previous versions of any file based on its date.

The command line interface delivers plenty of feedback on what its doing. Run even a simple backup command and it'll display details on its various threads, the files being processed, and how long you'll be waiting until the current job is done.

It's claimed that ZPAQ offers better compression than zip, too, at its default settings. That's going to depend on your source files, but a few quick tests showed positive results. Pointing ZPAQ at some test PDFs saved 9% on 7-Zip's default zip archive, and 6% over the 7z equivalent, while also being very quick.

ZPAQ is an excellent archiver which delivers more features and functionality in its command line form than many much larger packages. It's very usable, too, but if you'd prefer a GUI, try PeaZip (it comes bundled with a copy of the program).