Is your system safe from keyloggers? 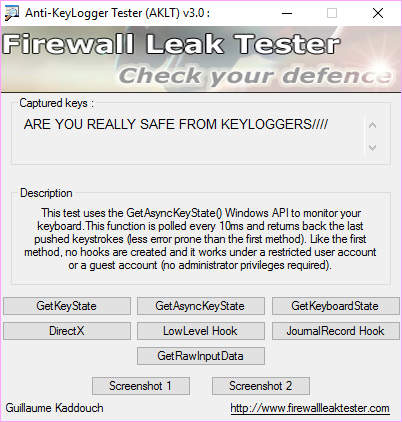 (We're defining an anti-keylogger as a program which offers protection from all keyloggers, not one which tries to detect and remove them.)

The program displays seven buttons, each one representing a separate keyboard-related test. All you have to do is click one of these, switch to some other application - a copy of Notepad is fine - and start typing. If AKLT displays your keys, the anti-keylogger has failed; if the "Captured keys" box stays blank, it's succeeded for this test-- and time for you to try another.

AKLT also has two screenshot buttons which attempt to copy the screen and copy it to the clipboard, or save it as a file. Does your anti-keylogger stop this? Try it and see.

AKLT hasn't been updated since 2010, but most of the tests are still useful, although we did notice a few small issues.

The program doesn't seem to detect or respond to modifier keys (Ctrl, Alt, Shift). Test by pressing number or letter keys instead.

AKLT sometimes continues to show its reassuring "nothing intercepted..." test message, even while it's also displaying keypresses. Forget the heading, look in the "Captured keys" box to see if anything has been intercepted.

On our system launching the JournalRecord Hook test always resulted in an error message. We think it's not compatible with modern-day Windows, so don't be surprised if you see the same-- just try another test.

Anti-Keylogger Tester had some small issues on our Windows 10 system, but considering it was written for Vista, that's no great surprise. The core of the program works perfectly and it's still a very useful way to test the effectiveness of anti-keylogger software.

Shield your data from keyloggers

A versatile but quirky security toolkit

Is software monitoring your PC use?

Protect your passwords from keyloggers

Emsisoft's virus hunter is faster than ever

Are you safe from information-stealing malware?

How to test anti-keylogger software

Ghostpress keeps you safe from (some?) keyloggers