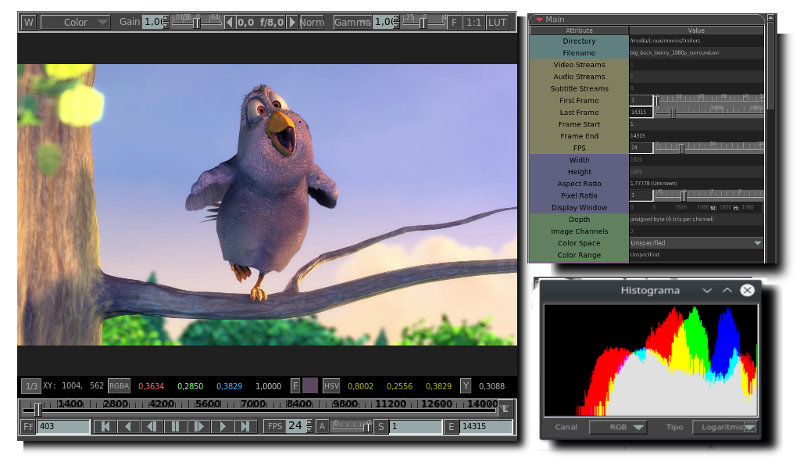 This starts simply enough. Drag and drop a regular image, audio or video file onto the program, and view or play it with the player bar. The interface around this is a little clunky - the program uses its own non-standard Open dialog rather than Windows' own, for instance - but we figured out the basics in seconds.

Play around for a while, though, and you start to notice some unusual extras. MrViewer doesn't have the widest file format support, but there's real depth in some areas, with the program able to handle animated GIFs, assorted 3D media (anaglyphs, top/bottom, side by side, interlaced, checkerboard), professional HDR imagery (HDRI, OpenEXR including multichannel, multiview, multipart), ACES 1.0 colour management, multichannel PSD/ TIFF/ MIFF, 4K video and more.

Playback pluses started when we realised the usual spin-the-mouse-to-zoom worked on videos, as well as images, even while playing. We could similarly adjust the frame rate, image gain, gamma and more, and see the results in real time. Even while playing videos backwards, if that helps.

You're able to open a host of companion windows and panels with more information: histograms, colour profiles, assorted low-level data on the media (codec, FourCC, B frames, pixel format, etc.)

Right-clicking expanded our horizons even further. Some options were obvious, though welcome (save files in another format). Others were more surprising (copy a pixel RGBA value to the clipboard, replace a soundtrack with another audio file). There were simple configuration options (decide which media attributes are displayed on the screen), handy bonus features (edit the offset of an audio file), simple extras (paint on the screen) and expert-level functionality (in-depth Colour Transformation Language support), all just a click or two away.

MrViewer's non-standard interface is frequently frustrating. Windows, buttons, folder navigation, menus, nothing worked completely as we expected, sometimes to annoying effect (the right-click menu disappeared for a while, there was no visible way to close the playback window).

But if you live with the interface, there's a vast amount of functionality here, from tiny bonuses (spin the mouse wheel to zoom in on a playing video) to professional HDR support.

Overall, we say try mrViewer if you think you'll use some of its power, but be ready for a steep learning curve.

- Made reel window reflect the first and last frames of the media instead of the full start and end frames
- Fixed reel window not sorting out images correctly when they were moved and not positioning them in the timeline correctly. - Fixed timeline not reflecting the image picked in the reel window when in edl mode
- Bug fixed windows v6.0.2 release as it was crashing
- Fixed audio closing on ending of movie files.

View, organise, tag and generally get your MP3 collection in order with this powerful toolkit