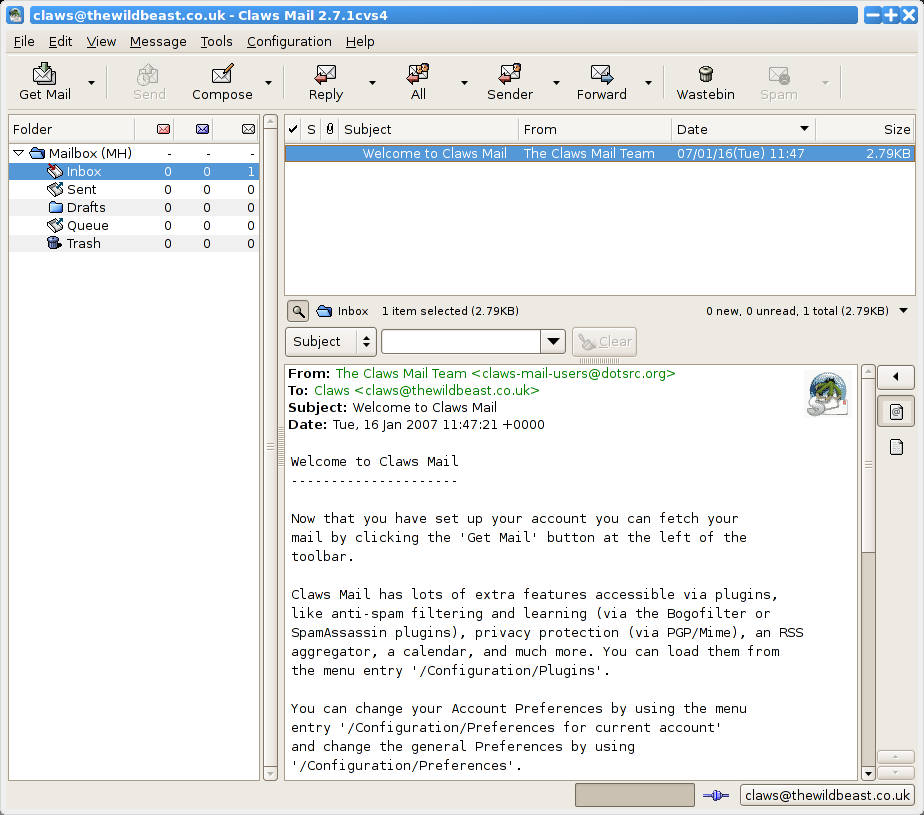 Claws Mail is a lightweight, fast and highly configurable mailer using the GTK2 toolkit. It started life as a fork of Sylpheed and was called Sylpheed Claws, adding bleeding edge features to Sylpheed and feeding them back to the original project wherever possible. Eventually, the two projects diverged too much and it is now a completely separate program.

Claws Mail is aimed at those who process a lot of email with advanced filtering and searching capabilities. It works with local mailboxes as well as POP3 and IMAP4 mail. It also handles NNTP news feeds like Usenet. Claws Mail is designed for dealing with plain text emails as efficiently as possible, but it has plugins to handle other types of information, such as HTML, PDF attachments, calendars and even RSS feeds. The plugins system has also resulted in other extensions to the program's capabilities with add ons to handle spam filtering and reporting, mail archiving, warning about missing attachments when sending, syncing with other devices and scripting with Perl and, most recently, Python.
The interface is themeable with several themes included as part of the standard package and plenty more available for download from the project's web site. Development is rapid with the authors responding to user feedback, queries and requests promptly and releasing new versions every couple of months to include those responses. Although mainly aimed at open source users, Linux and BSD variants, Claws Mail has been ported to Windows and Solaris, and even Maemo as used by the Nokia N series Internet devices and smartphones.

Back up Firefox, Thunderbird, IE favourites, Outlook Express, Windows Mail and more with this free tool

Take control of your inbox by prioritizing messages

Take control of your Gmail inbox with a Firefox extension