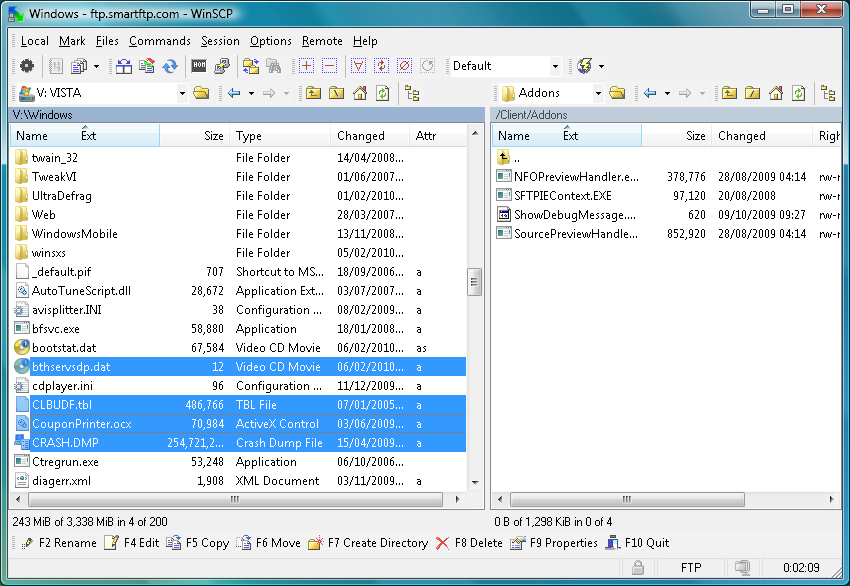 FTP may be one of the oldest Internet protocols (it was first officially defined in 1971), but it\'s still one of the simplest, fastest and most efficient ways to transfer files from one PC to another. Which is probably why it\'s usually the protocol of choice when it comes to uploading files to a web server.

There\'s a problem, though. While FTP can protect against unauthorised access with simple password authentication, the FTP connection itself is unencrypted. That means that, in theory at least, anyone with a well-placed packet sniffer could intercept your FTP traffic, read user names, passwords, then grab all your transferred files.

WinSCP is a transfer tool that can protect against this problem by connecting using the Secure File Transfer Protocol (also known as SSH). As long as the remote computer you\'re trying to reach also supports this protocol, then you\'ll be able to create an encrypted connection that keeps your data and files safe from snoopers. (Though if the server doesn\'t support SFTP, WinSCP can always make a regular, insecure FTP connection instead.)

However you get connected, WinSCP is very easy to use. It\'ll take your server name, port, logon details and so on, then save them for speedy access later. An Explorer-like dual-pane interface then shows your local PC on the left, remote server on the right, and transferring information between the two is as simple as dragging and dropping.

If even that sounds like too much work, then you can set up the program to automatically synchronise the remote server with a local folder. And WinSCP comes packed with other useful features, including an integrated text editor that allows you to directly edit files on the remote PC, and a command line interface for creating scripts to automate transfer tasks.

Note that this is the portable version of WinSCP.

A powerful tool for securely transferring files across the internet. It\'s also a capable FTP client, though, so take a look even if your server doesn\'t support SFTP