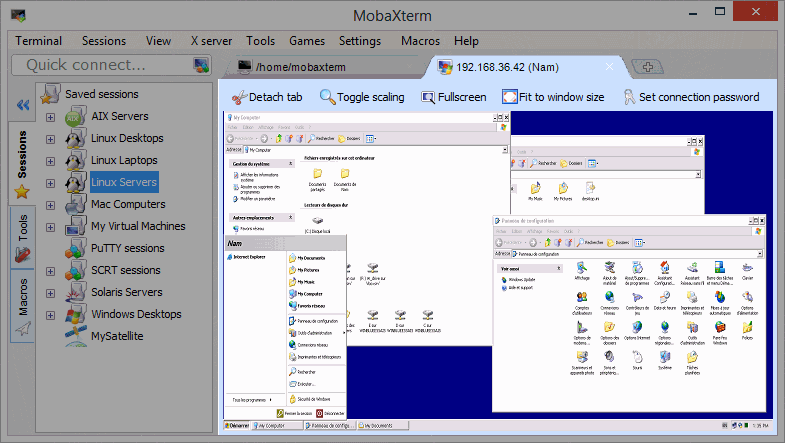 MobaXterm Home is a comprehensive portable network toolkit, packed with professional features and a host of bonus tools (including some real surprises).

You're able to have up to 12 sessions/ two SSH tunnels open at one time - SSH, Telnet, Rlogin, RDP, VNC, XDMCP, FTP, SFTP - and switch between them as required. (Note: the Home edition limits Tftp, Nfs and Cron sessions to 360 seconds. Upgrading to Professional removes all these restrictions.)

A "multi-execution" option allows you to execute the same commands on multiple sessions at the same time, and supporting tools include a graphical FTP/ SFTP client, and an integrated text editor (with syntax highlighting) for editing remote files.

The Servers module is another plus point. MobaXterm has built-in http, ftp, tftp, ssh/sftp, telnet, nfs, vnc and cron servers, and starting or stopping any of them takes just a couple of clicks.

MobaXterm even has a collection of simple puzzles and games - Sudoku, Minesweeper, a Space Invaders variant, 12 in total. A little bizarre, but it's something to do when the server is down.

MobaXterm Home is free for personal use. Upgrading to the $69 Professional edition removes all the restrictions, adds various features (master password support, you can modify your profile script), licenses you for commercial use and includes professional support.

MobaXterm Home is an excellent terminal with lots of worthwhile extras (the built-in servers are worth the download all on their own). Well worth adding to your network toolkit.

Manage all your RDP, VNC, SSH, Telnet and other remote connections from one place