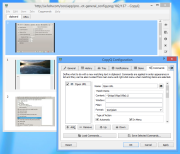 CopyQ is a tool which maintains a history of everything you copy to the clipboard, and allows you to manipulate this in various ways.

At its simplest, the program works much like any other clipboard manager. It lives in the system tray; in a click or two you can be viewing a list of recent clipboard items (text or images); and any of these can then be selected or pasted into the current document.

The clipboard history isn't fixed, though. You can drag and drop items around, delete elements you don't need, sort all (or just some) of the items, even organise them into tabs.

Individual clipboard items may be edited. You can add notes to them. There's even a built-in "commands" system which allows them to be processed, on demand or automatically: you can have items encrypted or decrypted, opened in a browser, launched in a media player, pasted as plain text, saved as a thumbnail or QR code, and a whole lot more.

You also get a huge amount of configurability. Other programs might have one or two customisable hotkeys to control their main actions; CopyQ has 38 (which alone tells you just how much it can do). It's the same with individual features. Creating a custom command, for example, isn't just a matter of specifying "program.exe %1"; the Commands dialog has 17 options which you can tweak.

What's more, all of this can be manipulated from the command line, to an astonishing level of detail. The official document gives this, for example, as a way to print all the items in a particular tab:

There are also major problems here. The interface is often unhelpful. Core concepts aren't clear (we imagined we'd be able to manually organise items into different tabs - but no). And there's vanishingly little documentation to point you in the right direction.

CopyQ's Windows build isn't exactly optimised for its environment, either. It has a command to open a URL, for instance, but this doesn't use the default Windows browser; instead it tries to launch curl, failing if you've not installed it.

CopyQ is still an impressive program. If you really need its power, then grab a copy and start exploring. But if you just want a clipboard history, move on - there are simpler and more straightforward tools elsewhere.

CopyQ is probably the most powerful and versatile clipboard manager we've ever seen. Unfortunately, its interface and documentation hasn't kept up, and figuring out how to apply its many features is a real challenge. Worth a look if you need its advanced functionality, scripting support and so on, but be prepared for a steep learning curve.