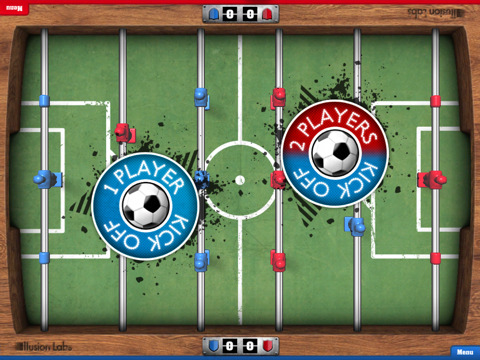 Table football is one of the most addictive, instantly playable games ever invented, and Foosball HD brings this traditional pub game to the iPad. With the option of playing against a computer opponent, playing one-on-one on the same iPad, or hooking together two devices, the gameplay opportunities are endless.

Foosball HD takes full advantage of the iPad's screen, delivering stunning graphics that utilise 3D shaders to great effect. There is a strong focus on realism, and in addition to realistic sound effects, an impressive 3D physics engine is also present.

Just as in real world table football, a game of Foosball can quickly turn into something fast and furious. The control system is as pleasing as the graphics, although you may find that they take a little while to master - once this has been done, you're away!

Whether you view Foosball HD as a way to show off the capabilities of your iPad, or a game which will keep you coming back for more, this is a game well worth investing in.

A mightily impressive table football sim which really makes the most of the iPad.

Control the lives of your Sims, building them a home, dictating their career and much more

Play a round of golf on your iPhone or iPad