Stream videos, music, images and more around your network with this media server 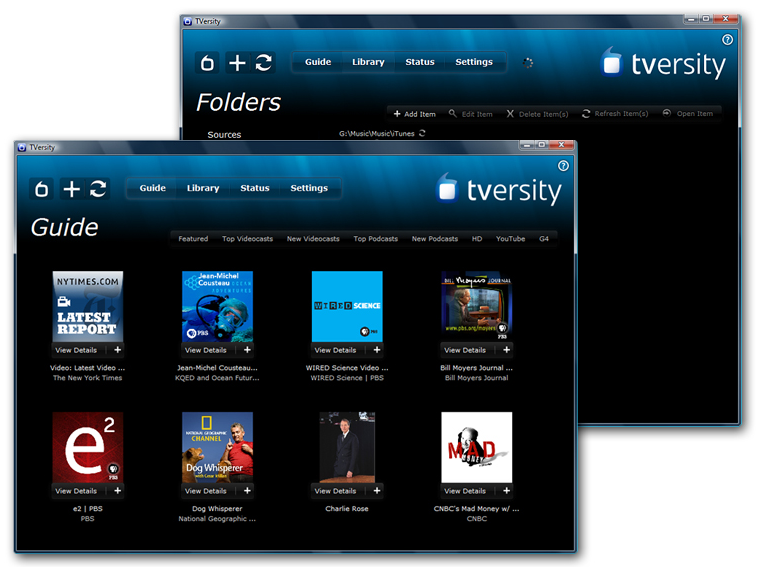 TVersity is a powerful media server that enables you to watch internet and local media on your PC, TV, games consoles and mobile devices.

Setup is fast and straightforward. Simply accept all the default settings and TVersity will be ready to go in just a few minutes.

You could then browse the programme guide. It's very US-oriented (featured links include items like NBC's Meet the Press and podcasts from CBS News), and not every link is available in the free version (BBC and other premium content requires you upgrade to TVersity Pro), but you can access YouTube and view a few other programmes for free.

The real value of TVersity comes in the library, though, where you're able to set up all the video, audio and image files that you'd like to stream. These can include local files, anything in a Media RSS feeds (an audio or video podcast, for instance), YouTube videos, Flickr images and more.

And once the library has been configured you'll be able to stream video across your network to any UPnP device: your TV, the Xbox 360, PS3, Wii and more. TVersity will generally transcode media to suit the device, which allows you to play files on (for example) an Xbox that it wouldn't normally support.

Note that TVersity is now available in Basic (free) and Pro (commercial) formats.

It has some rough edges and a bug or two, but if you need a free way to stream media files across your network then TVersity Free will get the job done.

Play back media from your Media Browser server on your Windows 8 device.

Stream images, music and video over the network to your PS3

Quickly create quality slideshows and share them with the world

Stream music, movies and photos to your iPhone, iPad, Xbox or PS3