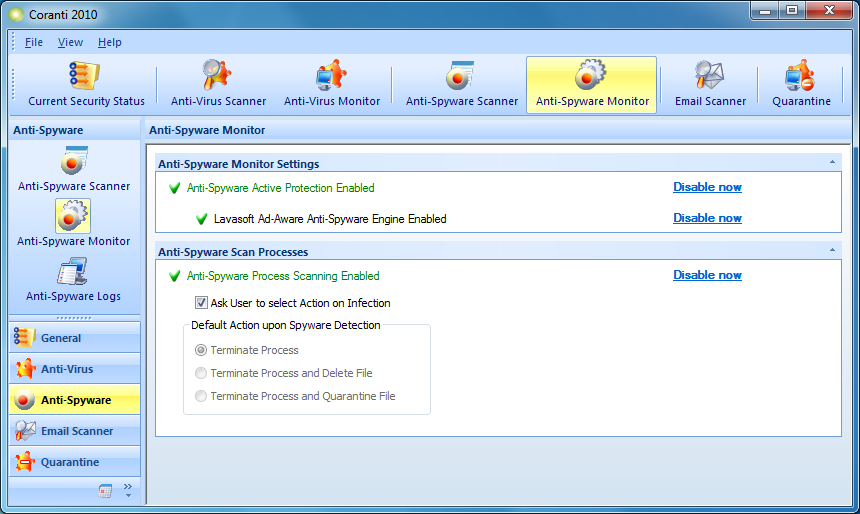 And so when you install the program you're not relying on one technology to keep you safe. Because Coranti 2010 blends scanning engines from BitDefender, F-Prot, Norman and Lavasoft into a single product, so if one engine misses a threat, there's still a very good chance that one of the others will be able to catch it.

What's more, Coranti 2012 is designed not to conflict with other antivirus solutions. So you could install the program as an extra layer around some other security suite, if you'd like the maximum level of protection, and they should all work together quite happily.

There are some less welcome consequences of a four-engine product, of course.

After installation, for instance, Coranti 2012 needed to download a huge 320MB of definitions updates, which took a little while (subsequent updates are much smaller, but still bulky).

And scanning times take longer, too. Not four times as long as normal, fortunately, but understandably Coranti 2012 can never be as fast as a single engine product.

Still, the program is a very capable antivirus tool that should catch more malware than the competition, while minimising false positives, so if you're looking for the highest levels of security then it's definitely worth a very close look.

It's expensive, and a little bulky, but there's no doubt that Coranti 2012 is very effective at detecting and removing malware

Maintain the security, privacy and performance of your computer